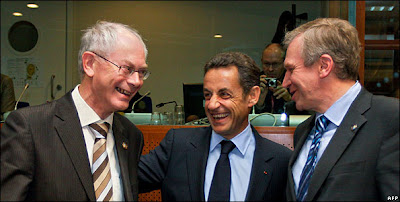 The BBC and others are reporting on the increasingly fraught negotiations in the EU over the selection of a European Council president.

Word was that he was supposed to be chosen over a working dinner to be held on Thursday, in the lead-up to the formal European Council meeting. However, we are now being told that the member state leaders cannot agree on a candidate, and that the negotiations might extend into the next day, or even beyond.

The selection though is being portrayed as a test of wills between the member state leaders, but what is not fully appreciated is that that is another player in the game – the EU commission – which has a vital stake in the outcome.

Historians of the EU will know that the original structure of the (then) EEC did not include the European Council in its institutional structure, the intention being that the supreme body would be the commission.

When the European Council was set up in 1973, Monnet intended it as a "provisional government", initially to provide the broad direction of European policy, until the commission was strong enough to stand on its own feet.

However, in the way of things, the "provisional" has become permanent, and with the adsorption of the European Council into the formal institutional structure of the EU, the "colleagues" have inadvertently created a rival power base, challenging the supremacy of the commission.

It is very much in that context that the candidacy of Herman Van Rompuy must be seen. As a Belgian politician, from a country which is traditionally one of the strongest supporters of the commission, he would be seen as a "safe pair of hands", who would not challenge the commission hegemony, and keep the lid very much on the European Council, restraining its ambitions to become the lead institution.

Behind the scenes, therefore, there is a vicious institutional battle being fought out. But this is not about the name of the candidate. Rather, it is a fight to the death as to whether the commission or the council will come out on top, determining the political shape of the EU for perhaps a generation to come.

As the commission's champion, Van Rompuy can expect a great deal of support, while the member states are divided on their own champion. If they fail to agree who to front in the lists, the Belgian nonentity could win thorough and the commission will have won the day. Until then, all we will see is the blood seeping from under the doors, into the couloirs.