The dominoes begin to fall 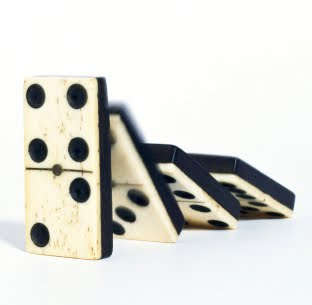 We said that Tom Wise was not the only one. Next in line is Mike Natrass, fingered by Daniel Foggo in today's Sunday Times.

There are reasons why an increasing number of people will not touch UKIP with a barge pole, and they are beginning to emerge. Behind Natrass are many more, men (largely) who have been running the party as their own private fiefdom, having lost sight of its aims and sold out to their own private greed and ambitions.

Fatally, such is their arrogance that they have been neither cautious nor discrete in the handling of their affairs, leaving themselves wide open to intervention by the authorities. The forces of darkness were always going to be gunning for UKIP, but the current actions of the leadership are equivalent to their standing in no-man's land having painted bull's eyes on their foreheads.

There has grown within that claque a belief of invulnerability, the feeling that "they can't touch us", not least because of the willingness to play the "victim card", as was done with the electoral commission affair, with many willing to believe that poor, innocent UKIP is being picked on.

Well, they asked for it, and the forces of darkness are beginning to close in. One by one, they are set to fall, and they brought it on themselves, betraying the party and the cause in the process. The only hope now is that there will be enough wreckage to salvage, allowing the party to be rebuilt with what is left.