Moving up the agenda 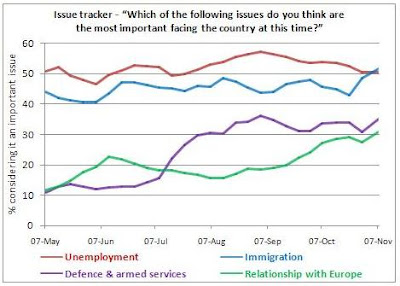 According to a poll carried out by Politics Home, the European Union is one of the fastest-growing issues in the league of those regarded as important by voters. The other issue is defence.

Some 31 percent of those surveyed now consider "our relationship with Europe" a key issue, compared to 12 percent six months ago. There was a small peak in June, around the time of the European Parliament elections, but the ratification of the Lisbon Treaty, and controversy over the Conservatives' decision not to hold a referendum on it, has seen interest reach a new high - the 10th most important issue, compared to the 18th back in May.

This rather underlines our proposition – shared by many – that the only reason "Europe" does not feature routinely high up in voters' concerns is simply because it is not talked about – not least because of the conspiracy of silence amongst the main political parties.

As to "defence and the armed forces", this actually scores higher than "Europe", with 35 percent of respondents believing this is a key issue, compared with just 9 percent six months ago. This reflects increased media coverage of the conflict in Afghanistan, moving the issue from 19th to 7th place in the league of "most important issue" within six months.

I think it has to be said that the increased concern about defence has not been reflected in much of the UK political blogosphere, which – with certain honourable exceptions – is trailing in this area (in contrast with US blogs). Neither do the main political parties seem to be giving this issue the priority the public seems to think it deserves. For us though, with our two blogs covering respectively the EU and defence, it is nice to be in the vanguard.

Despite this though, "Immigration and race relations" is still seen as a more important issue than either the EU or defence, with 52 percent of people now considering important, compared to 44 percent in early May. That will be music to the ears of the BNP, which cannot help but benefit from increased concern.

What is going to be interesting though is when people start linking the EU with immigration and, to a certain extent, with defence (to say nothing of "unemployment" which is one of the lead concerns). Once they realise the issues are interlinked, we may see "Europe" leap up in the ranks of "most important issues", leading – we hope – to unstoppable pressure for change.

To that extent, time is on the side of us "outers". As the Lisbon treaty bites, and the EU become more visible and obtrusive, we can expect more public interest, depriving the political classes of their current refuge, where they claim that it does not rank highly amongst public concerns.