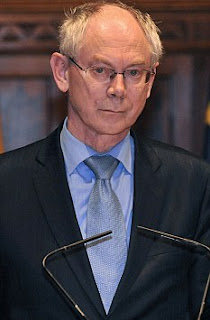 As the media wakes up to the "drama" of the selection of the EU president, the usual ladles of hyperbole are being deployed, with The Daily Mail reporting the "chaos" as the member state leaders "struggle" to agree on a candidate.

The Guardian on the other hand is working up its stock of pugilistic metaphors, as it headlines: "Gloves off as EU presidency enters final round", but this itself is a not-so-subtle dig at the media, who seem to be turning the process into a vast circus.

"The bad puns and juvenile jokes are washing back and forth across the strait separating Ostend from Folkestone," this paper says. "On the one side, warm beer, worse food, and football hooligans; on the other, chocaholics, fat wasted Eurocrats, and historical nonentities."

Even the Financial Times seems to hae been caught up in the madness of the moment, giving a blow-by-blow account of the in-fighting, with "voices-off" commentary from non-EU observers.

Perhaps the only newspaper which has got near understanding what is going on, however, is The Independent, with John Lichfield sniffily declaring that there is "nothing presidential" about the EU president's job.

"In truth, the great majority of EU governments," Lichfield writes, "are determined to make sure that it amounts to nothing very much at all: a Wizard of Oz without even the giant, illuminated mask or the booming, amplified voice."

Delve into the text of this piece and you will see earnest attempts to play down the importance of the post, but what you will not see is the hidden hand of the EU commission. But Lichfield articulates its voice, as it wakes up to the threat of a strong European Council president and his potential to marginalise the Boys in the Berlayrmont.

There is also an element here of personal alarm amidst the high-profile leaders of the member states, such as Sarkozy, who would not liked to be upstaged – in public or private - by an EU official taking centre-stage.

Thus, as we pointed out in our earlier piece, the real battle is to put not so much the man but the very position of the presidency back in its box. Neither the majority of the European Council members nor the commission wants a powerful or dominant personality.

That very much gives Van Rompuy the edge in the selection stakes, which have become a race to choose a nonentity, from whom all trace of personality and initiative has been excised. It may even be that this non-descript Belgian is too flamboyant for the "colleagues", in which case the hunt will be on an escapee from the Common Fisheries Policy - an apparatchik with the personality and character of a dead cod.

With the likes of Sky News hyperventilating about a "circus", therefore, it is quite amusing to watch the serried ranks of the media comprehensively fail to understand the nature of the drama going on under their very eyes.

Sadly, that typifies both EU politics and the reporting of it. Nothing, ever, is on the surface. What you see is most definitely not what you get. Our people, who have cut their teeth on the British "biff-bam" school of politics, have not even begun to understand the subtleties of EU politics. That is why they so often – as in this case – get it wrong.