Wise before the event 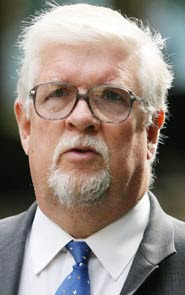 With Tom Wise awaiting sentencing for fraud, after changing his plea to guilty last week, Daniel Foggo in The Sunday Times gives the background to the case. Neither Wise nor UKIP come out well.

Not least, as Daniel is now able to record, UKIP – contrary to its claims – went to great lengths in an attempt to cover-up Wise's criminal activities. This segment from his article makes particularly interesting reading:

In court, the bearded and bespectacled Wise cut a pathetic figure for a man once elected in the name of a party committed to ending the EU "gravy train", though his arrogance remained intact.

It was a quality that had first struck me four years ago when he had attempted to bluster his way through my questions about his employment of Jenkins. Later, when he had been supposedly "exonerated" by the EU payments office, he had pompously said that my "attack on his character" had not deterred him from his important work. Wise even took legal advice on how to sue a political commentator who wrote blogs on the story, paying for it — although he did not proceed — with taxpayers' money from the same fund he was accused of abusing.

Arrogance is a quality that is not in short supply within UKIP; nor is an ability to dissemble and prevaricate. As Wise awaits a possible jail term at his sentencing this week, who knows which politician and which party will enter the dock next.

Those of us – including this blog – who have seen more of the evidence of misconduct within the Party than has so far been revealed are partially vindicated by Foggo's article. But we are aware that there are many other rotten apples still residing in the barrel.

And it is not enough to say that politicians in other parties are just as venal – if not more so. A central part of the UKIP message has always been that its people were not career politicians, and were above the corruption which disfigures politics and the EU. Such is their self-proclaimed image that they were the major beneficiaries of the MPs' expenses scandal, during the EU parliament elections.

We once had high expectations of UKIP. Wise has tarnished its reputation, and there is more to come. The self-serving behaviour of the "rotten apples", however, should not be allowed to detract from the greater cause.

Their actions do not reflect on the ordinary members, many of whom are hard-working, dedicated and sincere in their efforts to rid us of the occupying power that has become our government. Thieves like Wise do not represent eurosceptics. They are simply parasites who have lined their own pockets at our expense.