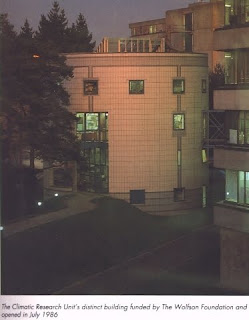 James Delingpole is still on the case, recording the very slight coverage in the MSM of the CRU hacking.

This has become very much another example of the blogosphere/MSM divide, with bloggers immediately realising the significance of the material, and the MSM running for cover. Given the intensity of interest though, this story is not going to go away, even if the MSM wants to bury its head in the sand.

James, incidentally, has picked up a useful site where all the e-mails are listed in searchable form, making it a lot easier to dip into the contents without having to trawl through each individual message.

He adds his view of the MSM (lack of) response, noting that it has been caught with its trousers down. The reason it has been so ill-equipped to report on this scandal – which is now being called "climategate" is because almost all of its Environmental Correspondents and Environmental Editors are parti pris members of the Climate-Fear Promotion lobby.

Most of their contacts (and information sources), says Delingpole, work for biased lobby groups like Greenpeace and the WWF, or conspicuously pro-AGW government departments and Quangos such as the Carbon Trust.

How can they bring themselves to report on skullduggery at Hadley Centre when the scientists involved are the very ones whose work they have done most to champion and whose pro-AGW views they share?

And this, of course, is the problem with the MSM. They have bought into the myth, and are now hopelessly compromised. The free spirits and independent thinkers are on the blogosphere, says James. And indeed some of them are, although there are far too many wannabe MSMers. But there are enough to tear this one apart - as always, WUWT is the one to watch.

There is also a good summary of the state of play here, and a nice analysis from Devils Kitchen. So far, of course, this hasn't gone "political", but anything which damages the warmist religion is bound to have political implications, not least because the politicians have so easily let themselves be gulled by the creed.

Interestingly, some years ago, I was telling politicians that the party that challenged the junk science and refused to follow the herd would win out in the end.

Cameron's quasi-conservatives, for instance, could have created clear blue water between themselves and nu-Labour on this issue. But the Boy just had to buy into it, and is now going to look as stupid as the rest when the whole thing comes crashing down, as indeed it must.

That said, with so many piling in, I'll let the others do the running. I'm still working on the Afghan history, trying to make sense of the conflict over there – another issue where the MSM is lacklustre to the point of useless.

The latest offering is here. It's taken a ridiculous three days to write – for one post – and I'm not happy with it yet. It still needs some more work. I'll stay focused on that, but report on "climategate" from time to time.

CLIMATEGATE THREAD
Posted by Richard at 15:25