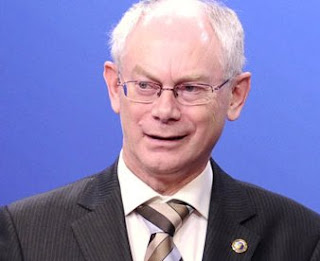 Although blogging is somewhat difficult at the moment, I really cannot resist a belated comment on the EU presidency charade, and in particular the Guardian report.

It notes that, while the "ideal appointment" has been suggested as "someone who could stop the traffic in Beijing", with the emergence of the Belgian prime minister, Herman Van Rompuy, as frontrunner, "Europe" may find itself contemplating a president who can barely stop traffic in Brussels.

Actually, it is par for the course. With the EU, contentious agreements are always reached on the basis of the lower common denominator. None of the big boys, especially France and Germany, could put up a president, as that would upset the others, so the candidate had to be one of the "dwarf" states.

Then, it had to be someone trustworthy, and they don't get better than Belgium or Luxembourg ... and it looks as if it going to be Belgium.

Actually, it is going to be very difficult to take Emperor Rompuy seriously, which is perhaps the intention. Behind the scenes, there is a major institutional conflict going on between the European Council and the Commission, for leadership of the EU.

However, while this man is supposedly the 11-8 favourite, the bartering is by no means over, and yet another figure could emerge. But the process really does prove the point about the anti-democratic credentials of the EU. Only the "colleagues" could pick as their leader a Belgium politician that almost certainly no one would vote for, including the Belgians.