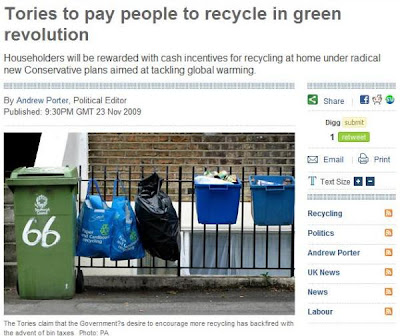 James Delingpole offers another piece on "Climategate", telling us why it matters. With some perspicacity, he also makes the point that the subject is being shunned by "mainstream" political commentators, who are curiously silent on the issue.

That indeed is one the curiosities of the age - "climate change" is far from being a matter of science. If the e-mails demonstrate nothing else, it is how so-called scientists have broken the bounds of scientific method and have become partisan advocates for a political cause.

Yet, while the "scientists" have turned politicians, the real politicians have vacated the field and let these self-interest groups run the agenda, their only role being craven surrender to the incursions on their territory. Thus have the politicians relegated themselves to impotency, following rather than leading.

And, just to illustrate the point, we see from The Daily Telegraph that the "green" Tories have totally, completely and utterly lost it.

Not only are they planning a crazy recycling scheme, they are committing themselves to "cutting carbon emissions in Britain by 10 percent within a year", creating the country’s first "green investment bank", introducing "Green ISAs" to encourage investment in green technologies and – God help us - "making Whitehall energy consumption transparent".

At a time when the warmist religion is falling apart at the seams, now the Tories choose to nail their policy even more firmly to a corpse, completely oblivious to the events going on around them.

Meanwhile, The Guardian is still struggling to hold the line, headlining: "email hacking to be looked into by University of East Anglia". It then tells us that the publication has been seized on by "denial bloggers", and invokes the Met Office to reassure us that there is no evidence "that data was falsified".

I wonder if they realise what they are writing: "warmist Met Office says warmist data not falsified – shock!" But that's not what Devil's kitchen thinks.