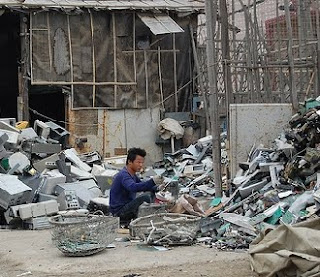 In a week where a goodly portion of the blogosphere has been dominated by the "Climategate" scandal, The Daily Scarygraph offers a leader which tells us: "The Conservatives have shown this week just how sure-footed they have become on green issues."

The stupidity of the Tory position (part of it), which argues for financial incentives for recycling, could be understood by a junior school student – in the days before they taught economics and thus wrecked the subject. Simply put, producer-led (as in waste production) incentives, without there being a matching demand, lead to massive and expensive surpluses (have they learnt nothing from the CAP?).

One of the dirty secrets of the recycling movement – although it has been exposed often enough – is precisely the accumulation of those surpluses, together with the attempts to dump them on third world markets, leading to the most appalling conditions and mass exploitation of the poor.

Now, it would seem, the putative Tory chancellor is displaying his economic "acumen" by proposing to bribe British households (using their own money, of course) with amounts which exceed the annual per capita incomes of many third world workers.

The effect of this will be to generate even more unwanted surpluses, which will doubtless be dumped on yet more third world markets, where conditions continue to deteriorate. And this, the Scarygraph believes is "sure-footed"?

More to the point though, when Gerald Warner is writing in his own blog - on the newspaper's own website – of Senator James Inhofe's determination to carry out an investigation of the "Climategate" scandal, the Tories have been totally silent on the issue.

Their opportunity came with Wednesday's PMQs, but Cameron instead, chose to claim that two schools linked to a radical Islamic group had received cash from public funds designed to tackle extremism. That attack, as it turns out, was misplaced, leaving the Boy with egg on his face – and yet again demonstrating the inadequacies of Tory political research.

Even worse, the failure of the Tories to challenge the global warming orthodoxy – when public support is rapidly shifting away from the warmist agenda – demonstrates quite how out of touch Cameron's quasi-tories really are. "Climategate", therefore, could not only bring down the warmists – it could seriously damage the quasi-tories as well.

CLIMATEGATE THREAD
Posted by Richard at 14:28