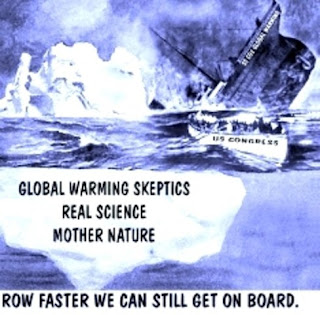 Lead item for The Times today is a survey the paper has commissioned on attitudes to global warming.

It finds that only 41 percent accept as an established scientific fact that global warming is taking place and is largely man-made. Almost a third (32 percent) believe that the link is not yet proved; 8 percent say that it is environmentalist propaganda to blame man and 15 percent say that the world is not warming.

Interestingly, while The Times makes a big deal of its own survey, that was that smaller survey reported in September, which had 29 percent of those questioned thinking the evidence on global warming had been exaggerated – double the number who held the same opinion in 2003.

That is vaguely comparable with this later survey, but The Times groups its various categories together to come up with the conclusion that less than half the population believes that human activity is to blame for global warming.

The paper observes that ministers have failed in their campaign to persuade the public that the greenhouse effect is a serious threat requiring urgent action, and it thus "will make uncomfortable reading for the Government as it prepares for next month’s climate change summit in Copenhagen".

But what is most significant is the response of the warmist community. Vicky Pope, head of climate change advice at the Met Office, interprets the survey as evidence that "growing awareness of the scale of the problem appeared to be resulting in people taking refuge in denial".

Ed Miliband, climate change secretary, resorts to the usual warmist mantras, saying: "The overwhelming body of scientific information is stacked up against the deniers and shows us that climate change is man-made and is happening now."

Predictably, therefore – rather like the EU – he believes the answer to the "deniers" is more propaganda. "We know that we still have a way to go in informing people about climate change," he says, "and that is why we make no apologies about pushing forward with our new Act on CO2 campaign."

And therein lies the great divide. Never once do the warmists concede that many of their so-called "deniers" have adopted their stance on the basis of good evidence. In their foetid minds, we must all be misinformed, and thus must be "educated" so that we can correct our errant ways. If we all row faster, they say, we might just get on board the Titanic before it sinks.