Got it at last! 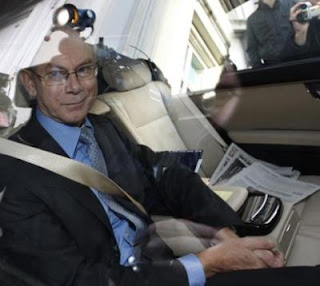 "The choice of two low-profile leaders means that there are two immediate political winners from the process. The first is the European commission, under its renominated president José Manuel Barroso, who has emerged as at least the first among equals in the new Brussels lineup ... ".

You have to read quite far down the piece, but at least its there, in The Guardian - the first (and only) newspaper to realise that the EU commission is one of the winners from the selection of Van Rompuy and Baroness Ashton.

They still have not fully put the story together though – but it will eventually emerge. This was a successful coup by the commission, downgrading the position of the European Council president and the high representative. They were helped by France and Germany, neither leader wanting to be outshone by a high-profile figure.

There remains, of course, the mystery of why the Commission let the two positions find their way into the new treaty, and it looks possible that they took their eye off the ball. But once the threat was recognised, they acted swiftly and decisively, and have got their people in place.

Not only are the leaders of the member states constrained by the absorption of the European Council into the maw of the institutional structure, but the commission have got their man in as president. And, as any good chairman will tell you, the power lies in being able to set the agenda. The commission now has that power, on top of which their high representative – who is also a commission vice president – will be singing to the same hymn-sheet.

Thus, while we get The Independent reporting "limp waves of polite puzzlement" circling the globe at the appointments, the commission is well-satisfied with its gains.

To understand that, it just has to be appreciated that the purpose of the Lisbon treaty was not "as advertised", extending the external reach of the EU, but one continuing the internal process of consolidating the structures of the EU government and increasing its powers. The rest can come later.

Once that is understood, the events of the last few days are completely coherent, and entirely in character. The name of the game is European political integration, and that process has just taken a lurch forward.

Cranmer adds more to the story.

ROMPUY THREAD
Posted by Richard at 01:50