The march of the clever-dicks 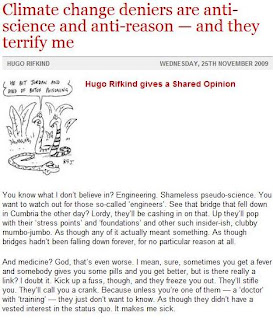 It really does not matter how much is said or written on a subject. If it goes against the grain of received wisdom, it will never penetrate the brains of the bien pensant clever-dick metropolitan writers, who make a living out of supporting the status quo - and being oh soooooo witty with it.

Storming into that category is Hugo Rifkind in The Spectator who pens his breathless piece under the title: "Climate change deniers are anti-science and anti-reason — and they terrify me."

This is on the issue of "the leaked emails" which show that scientists were conspiring to conceal research that, to which Rifkind's response is: "Yeah, whatever. Not interested. So some of them are crooks. It's like giving up on doctors because of Harold Shipman."

Given the ranking of the scientists involved, however, a closer parallel might be finding that the Royal College of Surgeons had done a deal with the local halal butcher and was roping in patients to flog off their bits for sausages. But such subtleties are beyond Rikfind. He has already made up his mind and cannot allow facts – or information – to taint his view.

To him, "climate change deniers" are the "forces of anti-science, anti-reason and anti-fact." Our natural bedfellows are the 9/11 Truthers ...

... people who believe that the way to deal with something frightening which they don't understand is to recast it as part of a convoluted fantasy which they do. Go back a few hundred years, and it's people like you who would have cried "witch" and run for the kindling when the village crone predicted that bad things might happen if you shagged your sister.

Inevitably, such scintillating wit clearly appeals to Will Heaven in his Telegraph clog, who thus roundly declares Rifkind "spot on".

There speaks the metropolitan "elite", providing also an explanation for why revolutions happen and tumbrels roll. There is no engagement, no attempt to deal with the issues – just a parade of ignorance dressed up as wit. You cannot argue with these parasites. You either tolerate them - or shoot them.

CLIMATEGATE THREAD
Posted by Richard at 14:18