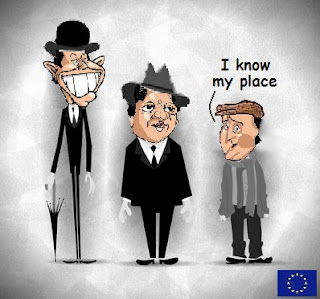 Klaus has signed the treaty. This is just short of eight years since the Laeken Declaration on 15 December 2001, when the Europeabn Council adopted a "Declaration on the Future of Europe", which kick-started the whole charade.

"It marks another step on the road to the 'ever closer union' envisaged in the founding document of the EU," says The Daily Telegraph leader.

The Laeken Declaration said the union needed further reform because "its citizens are calling for a clear, open, effective, democratically controlled Community approach". The leaders believed it was essential to tackle the widespread disenchantment about the EU among its people. Yet the manner of the treaty's ratification, certainly here in Britain, has served to worsen, not remove, that sense of disillusion.

As one of our commentators now puts it, the Czech Republic as a sovereign state ceased to exist on November 3rd 2009, 15:00 CET. And so all the member states of the European Union. For the former satellites of the Soviet empire now in the EU, though, this is particularly poignant. Now that they have been subsumed into a new empire, their independence did not even last 20 years.

Now the battle starts, as much with our own side and the enemy within. One notes that The Tory Boy blog has taken to deleting comments. I'm opening up a new comment thread of our own, which I'll keep running, under the heading "Lisbon Treaty". Unlike the freedom-loving Tories, we will not delete posts of which we do not approve.

Talking of "enemies within", it is interesting to see that Reuters is still perpetrating the deceit that this is a "reform" treaty. That is another of those easy lies for which the "colleagues" are notorious, but it is a shame that the news agencies fall in with it.

Barroso, as always, is crowing. "The road has been a marathon of hurdles but the last hurdle is now removed," he says, neglecting of course to say that the main "hurdle" has been the democratic process, which he and his ilk have trampled underfoot.

EU leaders, we are told, can now push ahead full steam with deciding whom to appoint to two jobs outlined in the treaty -- the new post of president of the Council of EU leaders and a foreign policy chief with enhanced powers. There is talk of an ad hoc European Council next week, to fill these new posts. Then we will have faces to the enemy. 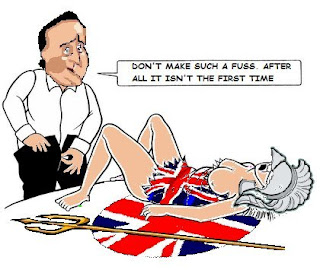 This, or course, removes the last possible fig-leaf behind which David Cameron can hide. We are told to expect a policy statement from him tomorrow, and even now there are intensive discussions taking place in the Palace of Westminster.

Barry Legg writes in The Guardian that each step in Cameron's approach towards the EU has been one of shameless contempt for the Eurosceptics who have loyally backed him in a way William Hague could have only dreamt that Ken Clarke, Chris Patten or Michael Heseltine might have behaved.

Despite their best attempts to "park" the issue, "Europe" has come back to bite the Tories, as it always would. With his "dance of the seven veils", however, Cameron has not made it easy for himself, and now he is going to have to come clean. Boy Dave is going to have to grow up and become a man.

That point is not lost on The Times, which has the Tories put "on the spot". Cameron is going to have real trouble with his insistence that he is not reneging on a pledge to give us a referendum. There is no longer a treaty to vote upon, the Tories bleat.

The Independent retails comments from Cameron on London's LBC Radio. Asked whether he had let voters down over the promise of a referendum, he replied: "No, I haven't and I won't."

He adds: "I believe we should have a referendum and we've campaigned for it, we've fought for it, we've put it up front and centre at election campaign after election campaign, we've challenged the Prime Minister about his broken promise in the Commons, we've tried to persuade other European countries not to sign the treaty because we think the British people should be allowed a referendum.

"But if the treaty is signed, if it is implemented, if it is put in place by all 27 countries, then clearly the situation will have changed and we'll have to address that changed situation. It won't be a treaty any more, it will be part of European law. Now, that looks like that is going to happen, I'm very disappointed about that."

And now William Hague has said it was "no longer possible" to put the treaty to a popular vote. 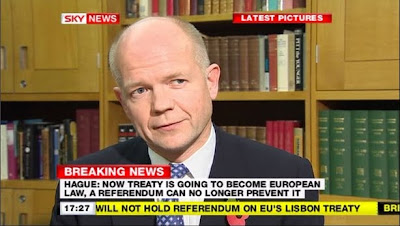 Reuters takes this as an unequivocal declaration that the Tories have walked away from a Lisbon referendum. Of course, Hague knew that this was going to be his response. But he had to play games all these months, pretending that a referendum was still an option.

That fool, James Forsyth, over on the Spectator clog is ramping up the theme that, "The accusations of betrayal being hurled at David Cameron are ... deeply unfair." The Sun promise of a referendum, he says, was always conditional on the treaty not being ratified by the time Cameron got elected.

He, like the Tory Boy Blog, though, seem to have rather selective memories, forgetting the Boy's speech on 26 May 2009, under the title: "Fixing Broken Politics". We will spell it out again:

On Tory Boy Blog, Jonathan Isaby, who claims to have been a "staunch eurosceptic" since the late 1980s, is lamenting the appearance of UKIP peer Lord Pearson on television. He has been "gloating" about the possibility of robbing 50 Conservative candidates of seats they ought to win next year.

"Therein lies the danger of not getting behind the party leadership on what I trust will be a robust line when he outlines it tomorrow," adds Isaby. And if it isn't a "robust line"? What then? Or will all the Tory Boys be told to believe it is a "robust line" anyway, no matter what they are given?

Gerald Warner is less easy to please. Abandoning the referendum, he writes, is an "historic moment" because it sets a new paradigm in political chicanery: Cameron will become the first British leader to have ratted on his commitments BEFORE even taking office.

It is a measure of the centrifugal force that political deceit has acquired and of the extravagant cynicism of the ruling elite regarding the electorate, Warner adds. Cameron has calculated, possibly correctly, that he can discard a "cast-iron" pledge to the electorate on the most basic issue in politics – the subjection of national sovereignty to foreign powers – and that the mug punters will still turn out and vote him into office. He continues:

Cameron is apparently about to join the historic list of Tory renegades, from Peel to Heath; the difference is, he feels he can rat on his promises even before an election and still win office.

If there is to be any hope for Britain surviving as a sovereign nation true Tories must abandon their Pavlovian voting habits and punish the gang of modernising cuckoos in the Conservative nest. Unless something truly Damascene occurs, Dave is less than 24 hours away from shamelessly declaring himself a forsworn leader. If he does so, the overriding priority in British politics will be to get him out.

That is not an uncommon sentiment, one which we share. With the issue being lead item on Channel 4 News, and the amount of press coverage, reaction has been sharper than we might have anticipated. But this is no longer about "Europe". It is about politicians ratting on promises. And that, to the average punter, is altogether more serious.