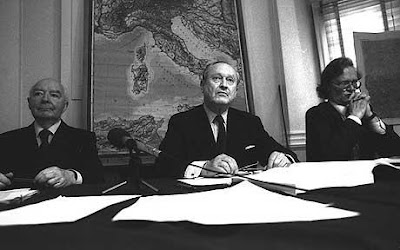 Died on October 29 aged 93. He had a varied career as a soldier; as chief industrial engineer for Rolls-Royce; and providing high-level liaison between many of Britain's leading companies and government policy-makers. But his two most notable contributions – illuminating one of the most controversial episodes of the Second World War and explaining the "gobbledegook" of EU treaties.

Two weeks before he died, from a massive and sudden stroke, he rang me to tell me about a piece in the media about global warming. Amongst his many attributes, he was very "sound" on this issue as well. While we were talking, I took the opportunity to ask him about his experiences in India, and he recounted that, as India prepared for Independence in 1947, he had been seconded to the Partition Commission, organising the separation of the country's armed forces between India and Pakistan

After that, he was assigned to the new Pakistani army. This led to what he described as the most worrying moment of his life. Returning to his Lahore headquarters one day he found himself, in British Army uniform, the only white man on a train overrun by thousands of armed Pathan tribesmen bent on seizing Kashmir. Sure his last hour had come, he was highly relieved when, addressing him as "sahib", they treated him instead with friendly respect.

That story found its way into Booker's obituary of the great man in The Daily Telegraph. They don't make them like that any more. He will be missed.