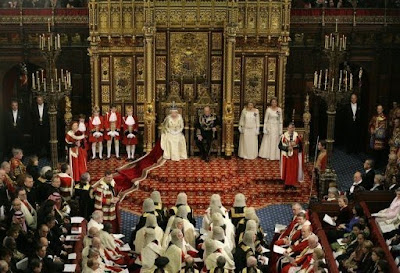 There seems a resolute determination in some quarters of the media to deny reality, something which is especially noticeable in The Daily Telegraph leader today.

"The State Opening of Parliament symbolises constitutional continuity," it gushes, its earlier pages offering huge pictures of the Royal procession to the throne. "It is an event intended to reassert the supremacy of Parliament," something, we are told, "that is desperately needed after conceivably the worst few months for the institution since the Civil War."

This, however, is less than two weeks to go before the Lisbon treaty comes into force, when Parliament takes another hit, on top of those it has already taken, further diminishing its powers and importance, as its primary legislative function is dragged over to Brussels.

In theory, Parliament is still supreme, but in fact, having outsourced most of its powers, it is but a hollow shell. There is nothing much left but the symbolism. Small wonder that the newspaper noted "something distinctly Lilliputian" about the proceedings. The Queen read out fewer words than were contained in the Telegraph editorial. The Commons Chamber, where there is normally standing room only for such an event, was barely two-thirds full.

Ben Brogan, the paper's political hack, nevertheless argued that the the Queen's Speech was all about "naked politics", in which there was some comfort to be found. Politics is the means by which we can start a debate about a programme for rebuilding Britain, he writes.

Beguiled by the Westminster bubble, Brogan believes that only the Conservatives can lead this programme. Voters may be fed up, even jaded, but they are not uninterested in the question of what happens next in our island story. "They will," says our egregious hack, "want to hear far more from Mr Cameron about this work of renewal before he gets to ask the Queen to read his speech."

Many voters, however, seem to think otherwise. Via WfW we see in the Tory Party Blog Eric Pickles counting down to victory, only to have the bulk of his commentators remind him about that inconvenient treaty, and Mr Cameron's desertion of his referendum promise.

Like the MPs who could not be bothered to attend the Commons chamber yesterday, they too have seen through the hollow charade, which leaves the pomp and circumstance of the Queen's Speech, but none of the substance. A more honest Parliament would have the ring of stars to flying over its Houses.