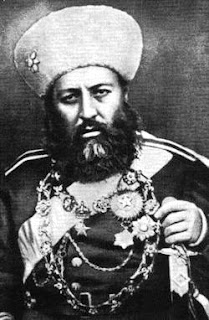 Having a go at Mary Riddell is a bit like pulling legs off flies – after they have been swatted with fly spray (the flies, that is). Even then one wonders though why her newspaper bothered to send her on a jolly to Afghanistan, for what good her vapid piece actually does.

Fully aware that people who live in glass houses shouldn't throw stones, I nevertheless find somewhat appropriate the comments of this writer, who rails against "... books and articles written by authors who, after flying through a country in a week or a few days, ignorant even of the language of the people, write large volumes on the secrets and hidden policies, feelings and motives of the people of the country."

"These books and articles," the author continues, "are considered great authorities by the public, who should know better than to trust the information contained in them, for they do more harm than good, giving as they do utterly false ideas of the country ... its institutions and its people."

The interesting thing about this passage is that it is taken from a book published in 1900. Its author is Abdur Rahman, who just happened to be ruler of Afghanistan at the time – so I suppose he knew what he was talking about. Rather presciently, he was writing in the context of Russia, and "the difficulties that attend going to war against Afghanistan."

But then this is the man who wrote: "To treat kindly those who disturb the peace is being an enemy to those who love peace." I guess he did know what he was talking about.