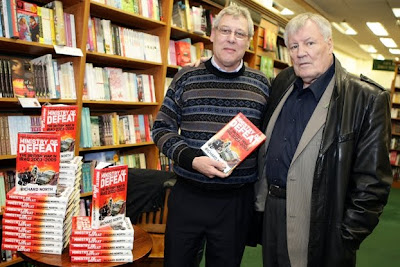 Harry Patterson (aka Jack Higgins) of The Eagle had Landed fame, with the author at Waterstones in St Hellier at last Saturday's book signing of Ministry of Defeat.

We had a long, interesting chat and the man then queued up at the till and bought the book. The photograph was his idea, and the photographer Ian Le Sueur later presented me with a print, in a brass frame. For all the evil in this world, there are still some nice people around. I was really touched.

At least we sold a few copies, and had the buzz of seeing the book in the shop window. I would be lying if I said the book was going well – it isn't, although it has covered its costs. Interestingly, we were joined by a young soldier, an Iraq "veteran", who had "been there" for six months. He has spent the entire tour in Basra Air Station.

However, I am not part of the gilded circle of correspondents who have tramped the foreign fields and thus claim the cachet of being there, so the book has not made the break-through I would have liked. But, I am told, it has been – and is being – read in high places (remarkably so) and there is some small comfort in that.

All I have to do now is explain to Mrs EU Referendum why I spent six months of solid writing, for a pittance that did not even pay the Council Tax ... not that I have paid it yet, although that is another story. Her name is on the summons, so she gets banged up in the nick, not me.