The end of the great deception 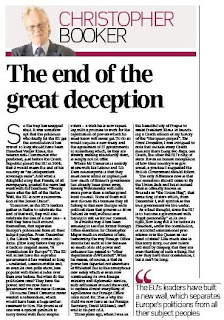 The EU has achieved the goal it has worked stealthily towards for so long - a supra-national government which is now beyond our recall, writes Booker in his column today.

He finds it appropriate that, as the trap has snapped shut, he politician who finally let the EU get its constitution should have been Klaus, the veteran anti-Communist. It was he that predicted, just before the Czech Republic joined the EU in 2004, that it would mean the end of his country as "an independent sovereign state".

And what a delightful irony, Booker adds, that Pravda, of all newspapers, greeted the news last week with the headline: "Twenty years after the fall of the Berlin Wall, the EU is now a reincarnation of the Soviet Union".

It will be tomorrow that the EU's leaders gather in Berlin to celebrate the end of that wall, but they will also celebrate the rise of a new one – a wall they have built around themselves, that separates Europe's politicians from all their subject peoples. Bring this forcibly home, Booker then writes:

From December 1, the Lisbon Treaty comes into force. (How long before they give it back its original name, "A Constitution for Europe"?) The EU will at last have the supreme government it has wanted so long – unelected, unaccountable and, as even its own polls show, less popular with those it rules over than ever before. But what do the politicians care? They have the power, and we now have a government we can never dismiss.

Despite Blair and then Brown having been responsible for the surrender, Booker – like this blog – focuses his ire on Cameron. He never wanted a referendum, which would have been a huge embarrassment to him, we are reminded.

His promise of one was a cynical gimmick to curry favour with Eurosceptic voters – a trick he is now repeating with a promise to work for the repatriation of powers which he must know he will never get. To do so would require a new treaty and the agreement of 27 governments to something which, as they are already making abundantly clear, is simply not on offer.

But there is another commonality with Labour and the Lib Dims. Cameron is entirely at one with his counterparts in that none of them must ever admit or explain just how much of Britain's governance has already been given away, leaving Westminster with little more power than a rather grand local council.

None of them will ever discuss this because they all belong to that new Europe-wide political class that governs us from behind its wall, without ever having to ask us for our consent. Booker continues:

In a wistful way it has been amusing to see that former Foreign Office mandarin Sir Christopher Meyer much in evidence of late, bemoaning the way Foreign Office morale has sunk so low because so much of its old power and influence has passed to "other departments in Whitehall". What he means, of course, is that its power has departed not elsewhere in Whitehall but to this amorphous new entity which is even now constructing its own foreign ministry and diplomatic service, with embassies around the world, to replace almost everything of significance our Foreign Office once stood for. This is why the child we now have as our Foreign Secretary, David Miliband, can't wait to be part of it.

Three years ago, when he was in Prague to assist President Klaus in launching a Czech edition of The Great Deception, Booker was intrigued to note that outside every Czech ministry there hung two flags, one Czech, the other the EU's ring of stars. It was an honest recognition of how their country was governed, a practice he suggested the British Government should follow.

The only difference now is that our ministries should cease to fly the Union Jack and hoist instead what is officially known in Brussels as "the Union Flag", that same ring of stars which, from December 1, will symbolise the true government we live under.

And a final thought from Booker: since the EU is to become a government with "legal personality" in its own right, how long will it be before its President, under the constitution, is accorded international precedence over the Queen as our head of state? Like much else in this sorry story, our new rulers will start by denying that they are even thinking of such a thing. But now they have their constitution, it can't be long.