Why we will lose 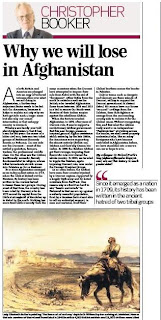 In his column today, Booker picks up on the theme we have been running on Defence of the Realm looking at Afghan history in the context of the current conflict.

Actually, he goes further, bringing it right up-to-date, whereas I am still plodding laboriously through the narrative, having only reached 1947 and the period just before the partition of India.

With what we have both put together, Booker is able to argue that "our armed intervention in that unhappy country is doomed", and I could not begin to disagree. He takes the line from the blog, telling us that Afghanistan has been for 300 years the scene of a bitter civil war, between two tribal groups of Pashtuns (formerly known as Pathans).

On one side, he tells us, are the Durranis – most of the settled population, farmers, traders, the professional middle class. On the other are the Ghilzai, traditionally nomadic, fiercely fundamentalist in religion, whose tribal homelands stretch across into Pakistan as far as Kashmir.

To DOTR readers, the narrative will be quite familiar, until we get up to the Soviet invasion in 1979, after years of Durrani rule, which Booker notes was to support a revolutionary Ghilzai government. I haven't researched that period fully yet, but he remarks how the eventual outcome was to lead to the dominance of the Ghilzai-run Taleban, toppled by our 2001 invasion when we again imposed Durrani rule.

As so often before, writes Booker, the Ghilzai have seen their country hijacked by a Durrani regime, supported by a largely Tajik army and by hated outsiders from the West.

One reason, therefore, why we find it so hard to win "hearts and minds" in Helmand is that we are up against a sullenly resentful population, fired by a timeless hatred and able to call on unlimited support, in men and materiel, from their Ghilzai brothers across the border in Pakistan (with the support of the Waziris and other tribes).

The situation is, of course, far more complex than that (there is only so much Booker can cram into his piece). There are many other factors which contribute to the current situation, but even the Islamic fanaticism of the Taliban is not new, or indeed the breakdown of some of the tribal structures, which has been an active goal of successive Afghan rulers since the 1880s, when Abdur Rhaman Khan first embarked on a programme of breaking the power of the tribes.

But whatever the layers of complications, though, at its very heart the Afghan conflict remains a tribal contest.

Thus, while in towns such as Sangin and Garmsir are there islands of Durrani, willing to support the Durrani government in distant Kabul, no sooner have our forces "secured" a village from the Taliban than their fighters re-emerge from the surrounding countryside to reclaim it for the Ghilzai cause.

Writes Booker, without recognising this, and that what the Ghilzai really want is an independent "Pashtunistan" stretching across the border, we shall never properly understand why, like so many foreigners who have become embroiled in Afghanistan before, we have stumbled into a war we can never hope to win.

Left there, Booker's piece ends up on a pessimistic note, from which the obvious conclusion can be drawn. But it has to be said that, for short periods in the history of Afghanistan, the tribes have been suppressed, although with a degree of ferocity that current Western mores would never allow. It is not that it cannot be done, therefore. More like, it cannot be done by Western military forces.

As long as we remain there, it thus seems, we will be the "piggy-in-the-middle" of an unresolvable tribal war. If we have an effect, it is to unite otherwise disparate tribes against a common enemy.

Should we leave, however, history tells us that the country will degenerate into a vicious civil-war, but that would not necessarily lead to another Taliban take-over. But what would emerge is anyone's guess. Traditionally – in the Raj days – our role has been to pick a winner, supply him with guns and money and let him get on with it, closing our eyes to the mayhem that results.

That is the reality of Afghanistan. But there is another reality: democracy has absolutely no place in the middle of a tribal war. As a system of government, it is entirely inappropriate, a society split on tribal (and ethnic) lines preventing the emergence of a demos, the very essence of a democratic system.

Eventually, we will recognise this – when the patience of our own people wears out and we refuse to accept the continual drain of our blood and treasure. We will then walk out, as we did in 1947, and leave them to it. The result will not be pretty, and could possibly drag the whole region down into a nuclear conflagration, which is one of the reasons why a clean break seems impossible.

Logic suggests that we should seek to broker a regional solution to the broader regional problems, and then revert to the only policy for Afghanistan that has worked for the last 300 years – to empower one tribe to suppress the others, and let them get on with it, encapsulating the boil, rather than seeking to lance it.

In a sense, that is what the "Afghanisation" policy is really all about – building up the Afghan security forces - but the one thing missing is a strong leader. Karzai has demonstrated neither the will nor the capability to deal with the problem, and there is no indication that he ever will. In traditional Afghan politics, weak leaders are either assassinated or deposed, a new leader then emerging from a period of civil war.

By interposing our own requirements for a "democratic" leader, we have interrupted that process, but we have not abolished it. Hoist with our own petard, we are now locked into that unenviable role of "piggy-in-the-middle", saddled with Karzai for an indeterminate period.

There is, however, always our traditional escape route – an engineered coup d'état, opening the way for the leader of our choice. That, in the past, has not worked so well for the Americans. It certainly did not work in Vietnam and it is difficult to achieve in the glare of modern media scrutiny.

Short of that, though, Booker is right. We will lose. Our only real choice is whether sooner - or later, when we have the fig leaf of a Afghan army in place. There will be bloodshed either way, but the longer we leave it the bigger will be the butchers' bill for our own troops.