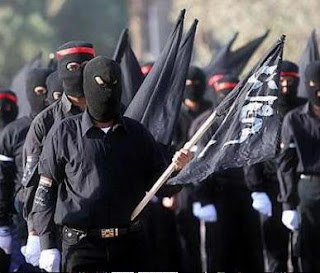 The Sunday Telegraph is carrying reports of leaked documents, attesting to the lack of preparation for the "nation-building" phase of the Iraqi conflict in 2003.

In particular, we have Maj-Gen Andrew Stewart writing: "The pessimist in me says that Iraq is a missed opportunity … at the strategic level we had poor judgment, thinking there was time ... My greatest fear is that, should the political and development process fail, we may become the focus of hostility and resentment from the whole spectrum of Iraqis."

Even two years into the occupation, however, Gen Stewart thought, "we and the Iraqis will somehow muddle through." But it was not to be. By 2007, the Army had lost control and was hunkered down in Basra, virtually under siege.

The point is, of course, it was never going to be. The invasion had removed the lid from a pressure cooker and before even the occupation had formally started, on 1 May 2003, there was the makings of an insurgency under-way. Within six months, the Army had effectively lost control and never regained it.

The interesting thing is that, now the Chilcot Inquiry has started, and evidence is coming out in the open, the "leaks" are starting, the players quite obviously aiming to get their disclaimers in quick, before they are caught in the glare of publicity.

But if the truth is starting to come out in the media, those of us with longer memories will recall how, in early 2003 the Army was accepting plaudits for its "skill" in dealing with the post-war situation – unlike the clumsy Americans. Thus we had USA Today telling us how the "British postwar approach provides model for US", with the military lapping up the praise for its "soft-hat" approach.

Then, even in August 2007 – long after Basra had gone belly-up - we were hearing how Maj-Gen Jonathan Shaw was lecturing the Americans on how best to conduct counter-insurgency operations, citing the fabled Northern Ireland experience.

And at the end of last year, just before we had been told to get out of Iraq, we had the likes of Gen Jackson claiming that everybody else was to blame, except him and his Army – right down to the Iraqis having "unrealistic expectations" and the "security vacuum" caused by "appalling decisions" in Washington.

In the New Year, this was followed by a brace of generals claiming that the military task had been achieved and: "We have created a secure and stable environment for social and political development to take place."

The current protestations might be a little more credible if there had been some earlier acknowledgement of the problems. Almost to this day though, the official view has been that Iraq was a "success".

But, if the Chilcot Inquiry is now calling "time" on the delusions, a certain book, which no one wants to talk about, got there first. And a little bird tells us that the Chilcot staff are avid readers.