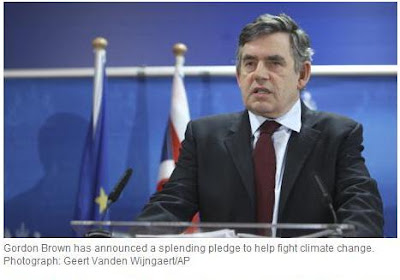 Gordon Brown has announced a "splending" pledge to help fight climate change fraud (look at the caption to the pic).

That is a $22bn (£13.3bn) global fund to respond to the world's "climate emergency fraud" by fast-tracking funds to poorer countries from next year – of which £800m is (or will be) our money.

The new word, coined by the Guardian, is rather appropriate. Since Mr Brown hasn't stolen the money from us yet, he is going to have to get some poor fools to lend it to him, so that he can spend it ... hence "splending". They lend, he spends..

CLIMATEGATE THREAD
Posted by Richard at 01:35