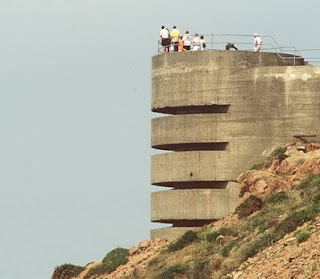 This is the Daily Mail's "take" on the continuing fall-out from the Tory non-policy on "Europe". It has a lot of the faithful "spitting blood" at Cameron's refusal to offer a referendum, threatening to vote UKIP.

I'll do a proper review of this and other coverage later today. Yesterday, apart from a very successful defence debate in Jersey, I spent some time sitting on the cliffs overlooking Bon Nuit cove, looking at the distant shoreline of France.

Jersey is an island where the memories of the German occupation are still very fresh, and along the coastline there is still the evidence, with a network of huge concrete bunkers and fortified gun positions. I got to thinking about how we are going to handle the new occupation – this one of mainland Britain - as our supreme government takes over on 1 December.

I think I may have had too much booze. I'll set this post to self-destruct in five hours. Please eat this message after reading. Sanity will be restored shortly.