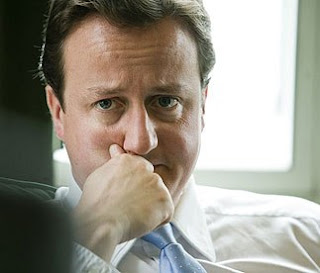 There was a sense that the story on "Do-nothing" Dave and his amazing technicolour "Europe” policy was beginning to fizzle out. We've done it to death, although for once we've been addressing our core subject – the one for which this blog was set up.

What now gives it "legs" though is the reaction filtering in from the rest of the member states, which gives us a new and important perspective on the situation.

Unsurprisingly, this comes via The Guardian which, despite its Europhile tendencies, frequently offers depth that you do not find in other newspapers.

What it tells us that, in addition to France – and the obvious reaction from the likes of Elmar Brok – there is real, deeply-entrenched resistance to renegotiating the EU treaties, which will be necessary if Cameron is to achieve the repatriation of any powers.

Up front are the Europe ministers from three member states: Poland, the Netherlands and the Irish Republic. All three are saying that that Cameron would fail to achieve his demand to repatriate social and employment laws to Britain because his plans would need to secure the agreement of all 27 leaders of the EU because they would involve rewriting EU treaties.

For the Dutch, Frans Timmermans says that the Tory plans would have a "paralysing effect on Europe". He added: "There is more chance of a snowball surviving hell than the EU restarting debates on treaty change." He adds that no EU leader would want to reopen treaties to accommodate the Tories.

Mikolaj Dowgielewicz, the centre-right Polish Europe minister, expands on this, saying treaty change is out of the question. "We have finalised the most difficult and the most lengthy procedure of ratification that we have ever been through in Europe. Nobody wants to negotiate a new treaty."

Then there is Dick Roche, for the Irish. He says: "There is a complete aversion across Europe to the idea of going through the kind of process we have just gone through. If you are talking about areas that touch on free movement or the whole central core trade areas then you are entering into minefields. The only thing that happens to people who enter minefields is they get blown up."

Now, on this blog, both my co-editor and I have been saying this for some time. We are by no means alone in so saying. It was always on the cards – in fact it was a racing certainty – that this would be the reaction. Therefore, the only way there were going to be any treaty negotiations was if Cameron made them the archetypal "offer they couldn't refuse."

Thus, nothing Cameron says or promises by way of repatriating powers has any meaning whatsoever unless he has that "offer", or a very big stick to bring the reluctant "colleagues" to the negotiating table. 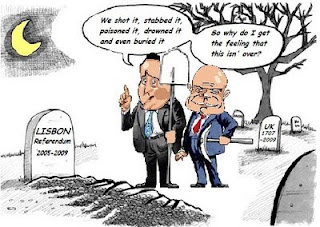 From our point of view, what Cameron has on offer, we've heard before. Twenty years ago, Booker, myself and others were talking privately to then senior Tory ministers, all of whom were telling us that they were eurosceptics at heart, and were determined to repatriate powers.

But not any of them – then or now – have been prepared to tells us how they would bring the "colleagues" to the negotiating table, and what they would do if they said "no". That is what makes Cameron's policy more of the same – empty and completely devoid of substance. He has no fall-back to deal with a blank refusal to negotiate. And, not days after the Boy's speech, the "colleagues" are ganging up to say "no".

That leaves us in an interesting position. On the one hand, we can accept that the Tories did not expect such a reaction – which can hardly be likely, since they've been told time and time again that this would happen. On the other, we can conclude that the Tories are not serious. That they have no real intention of pursuing renegotiations.

In fact, that is the inescapable conclusion, from which stems the further conclusion. Cameron's policy is no more than a cynical exercise in deception – a rag-bag of empty promises dressed up to make it look plausible to a gullible media and some of the electorate. It is calculated to be sufficient to take the edge of a "eurosceptic rebellion" and get him past the hurdle of the next election without losing too many votes.

At least though, with record speed, the "colleagues" have called Cameron's bluff. His "Europe" policy is dead in the water. If there was any justice, so would be his prospects of becoming prime minister. This brazen cynicism really should not go unpunished.