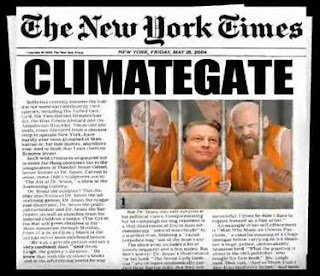 On the ball as always, with the latest orthodoxy, Reuters is happily reassuring us (itself) that the revelation of a series of "embarrassing" e-mails is not a "game changer".

The proof of this assertion comes with the cast-iron, copper-bottomed mantra which wards off all evils, the answer to life, the universe and everything ... "experts believe ... ". Ranking alongside "scientists say ... ", these mantras are the modern equivalent of garlic used to ward off the devil (aka sceptics).

With the terror of doubt thus banished, the agency intones that a "report by a group of leading scientists ... " tells us global warming is accelerating and that world sea levels could rise at worst by two metres a year. This is supposed to be "grim reading". This is matched - of course - by the "the daily scare" from the nation's global warming comic. Yet, what the warmists do not seem to understand is that the more they shout, the less people believe.

To many readers of the MSM output, this constant diet of alarmism is more like a comedy turn, as they pile in to call time on editorial boards which seem to have their heads stuck firmly in the sand. Even Moonbat got over 1000 comments, mostly ripping him apart.

When the CBS News blog also starts taking it seriously, you know something is afoot, but there is a long way to go. The pols are still on a different planet. "Don't you think it's scary," a minister said yesterday, "that 55 percent of people don't believe global warming is man-made?"

The problem though, that these people have their own tame propaganda organs, even though evidence is accumulating that global warming is most definitely man-made – but not as we know it. That is really scary.

CLIMATEGATE THREAD
Posted by Richard at 12:08