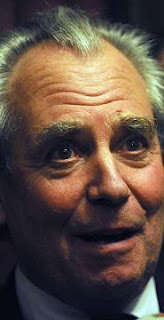 There seemed to be more to David Cameron's refusal to hold an EU referendum than just a decision based on a careful assessment of the options. His petulant style and manner suggested something more deep-seated.

And now we learn from Lord Pearson that that was indeed the case, as he reveals to The Times that he personally offered the supposi-tories a deal that would have UKIP standing down at the general election in exchange for a referendum.

This was six months ago, immediately after the EU parliament elections, when Pearson personally met with the supposi-tory leader in the Lords, none other than Lord Strathclyde.

Strathclyde confirms that the meeting took place, but there was no follow-through. The offer having been made, the supposi-tories acted in their normal fashion – they simply did not respond directly. The answer was given when the Boy stood up and offered his faux EU policy some months later.

Pearson, himself a High Tory of the old school, has his own explanation for the Boy's silence. "A referendum on a ratified Lisbon Treaty would have become about in or out," he says, "which is why the political class wouldn't do it."

A representative of that political class, little Mark Francois, the supposi-tory shadow Europe minister, tries to make the best of it, blathering: "We don't make policy on the basis of secret deals with other parties. We decide our policies on the basis on what is right for the country."

Pearson though – like the rest of us – is unconvinced. Speaking after his election as UKIP leader, he declared that his ambition was "... for UKIP to do well enough at the next general election so that we can force a hung parliament and a realignment in British politics."

With the supposi-tories twittering about how well they are doing in the marginals, Pearson aims to rain on their parade, taking at least 50 seats from them – the so-called UKIP-effect that we saw in the 2005 election.

The supposi-tories counter that such a strategy risks letting Gordon Brown back into power, but Pearson's revelation now demonstrates that they are to blame if that happens - not us. They were given an opportunity to pull in the eurosceptic vote and, as we observed at the time, little Boy supposi-tory deliberately turned his back on a million-plus voters.

For us now to smile sweetly and vote him into office is a non-starter. Cameron has made his decision. We did warn the Boy ... no referendum, no vote. Pearson has set the measure for our response.