Worse than we think 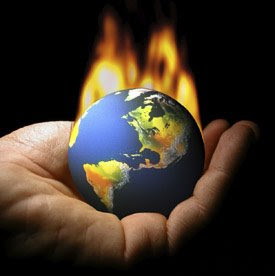 Booker is in an optimistic mood today in his column, declaring that, "2008 was the year man-made global warming was disproved."

To support his thesis, he points out that all over the world, temperatures have been dropping in a way wholly unpredicted by all those computer models which have been used as the main drivers of the scare.

He thus tells us that last winter, as temperatures plummeted, many parts of the world had snowfalls on a scale not seen for decades. This winter, with the whole of Canada and half the US under snow, looks likely to be even worse. After several years flatlining, global temperatures have dropped sharply enough to cancel out much of their net rise in the 20th century.

Secondly, 2008 was the year when any pretence that there was a "scientific consensus" in favour of man-made global warming collapsed. At long last, as in the Manhattan Declaration last March, hundreds of proper scientists, including many of the world's most eminent climate experts, have been rallying to pour scorn on that "consensus" which was only a politically engineered artefact, based on ever more blatantly manipulated data and computer models programmed to produce no more than convenient fictions.

Thirdly, as banks collapsed and the global economy plunged into its worst recession for decades, harsh reality at last began to break in on those self-deluding dreams which have for so long possessed almost every politician in the western world.

As we saw in this month's Poznan conference, when 10,000 politicians, officials and "environmentalists" gathered to plan next year's "son of Kyoto" treaty in Copenhagen, panicking politicians are waking up to the fact that the world can no longer afford all those quixotic schemes for "combating climate change" with which they were so happy to indulge themselves in more comfortable times.

However, reading The Times leader yesterday, headed "The war on Carbon", you would think its writer lived on a different planet.

In a litany of warmist orthodoxy, it tells us that, "There will be continued argument about the science of climate change over the next 12 months, but not, except on the conspiratorial fringe, about the threat. Climate change is real and worsening, and there is an overwhelming likelihood that much of it is man-made."

And still we get the same mindless drivel from the warmist tendency in The Daily Telegraph, that darling of the greenies, Louise Gray telling us that, "Daffodills at Christmas and snow in October were just some of the unusual weather patterns noticed by the National Trust in the last year as climate change begins to takes its toll on the British landscape."

Thus, snow in October is "climate change". Nothing of what has so engaged Booker and many more of us has percolated the orthodoxy, which has not shifted one iota from its original position. It goes on regardless.

Nor, from an op-ed by the Great Leader, David Cameron, do we see any retreat from his position. He proudly reminds us of his commitment in an advertisement almost exactly three years ago "to tackling poverty and climate change, our backing for the NHS and our belief in a free enterprise economy."

But, bringing us back down to earth with a bump is a piece in The Times - business section, of course, headed, "Blackout fear as UK power plants face axe."

The story is interesting because it tells us what we suspected and feared – that the effects of the EU's Large Combustion Plant Directive is going to be more damaging than predicted.

The nub is that, when power plant operators made their decisions to opt out of the directive and thus close down a number of coal plants by 2015 rather than pay the exorbitant sums needed to conform with the directive, it was assumed that these plants would only be used for peak generation, working on limited hours.

Because of the recent price distortions in the energy market, however, these plants have been working more or less full time, providing base load electricity and thus becoming worn out faster than anticipated. With major refits being economically unviable, given the limited lives of the plant, many will now have to close down early.

The first of them, Scottish Power's 1.2GW plant at Cockenzie, which generates enough power for 1m homes, will close as early as September 2010 based on current rates of electricity production. The "energy crunch" is thus predicted to hit us by 2013 rather than 2015, as we lose some 7.6GW of electricity – ten percent of the UK's total capacity.

The seriousness of this issue is such that it is this, rather than their fatuous obsession with "climate change", on which our policy-makers should be concentrating, to say nothing of the anticipated shortfalls in crop yields that will come as a result of the extended bad weather.

If we are already seeing global instability, this is nothing compared to the chaos which will ensue as more and more developing countries compete for dwindling food supplies. The world will be in flames, but it won't be because of "global warming".

Unfortunately, therefore, while Booker is undoubtedly right – the miasma of "global warming" having now lost whatever credibility it ever had, the dark shadow of obsession still afflicts our ruling classes and they are not even beginning to budge. I suspect it will take catastrophic failures in our own electricity supply system, and famine on a global scale before reality percolates their dismal brains.

By then, it will be too late, but for the hand wringing. Perhaps we should encourage them to practice that, so they are well-prepared. Anything else, clearly, is too much to ask.