It's the economy stoopid 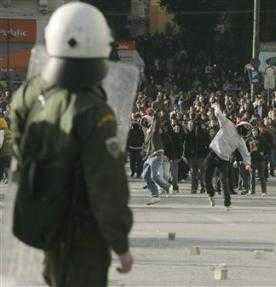 As the Greek riots pass their fourth night with no let-up, the situation – as reported – seems to be getting more grave, with a general strike adding to the nation's woes.

What marks this out us the comment from Stathis Anestis, spokesman for a federation of private sector unions. He says: "Participation in the strike is total, the country has come to a standstill." Banks, schools and public transport are shut and hundreds of flights in and out of the country have been cancelled as air traffic controllers also went on strike.

The level of unrest here, and the huge support for direct action, is clearly more than a rump of disaffected youths running amok. The whole country is crying out, and there is clearly something seriously and fundamentally wrong.

It is perhaps typical though that one of the primary architects of the current crisis, prime minister Costas Karamanlis, is the one who is so strident about the "enemies of democracy," seeking to dismiss the riots as "acts of vandalism". Yet even the headline in the popular daily Ta Nea proclaims: "Government and police on the brink of collapse".

It is, as you might expect, Ambrose Evans Pritchard who takes a broader perspective, looking at the economic issues. He remarks that these riots illustrate "the slow-burn effects of Europe's monetary union" as they "begin to corrode the democratic legitimacy of governments."

Greece's euro membership, he writes, has led to a warped economy. The current account deficit is 15 percent of GDP, the eurozone's highest by far. The deficit ($53bn) is the sixth biggest in the world in absolute terms. The public debt is 93 percent of GDP, well above the Maastricht criteria, and international investors are treating Greek debt as if it were the plague.

Year after year of high inflation has eroded the competitive base of the economy and the underlying rot, disguised by the global credit bubble and the Greek property boom, is now being laid bare.

Nevertheless, Ambrose expresses a little surprise that the "riot phase" of this long politico-economic drama known as EMU has kicked off so soon, and that it has done so first in Greece where the post-bubble hangover has barely begun. The crisis, he says, is much further advanced in Spain, which is a year or two ahead of Greece in the cycle.

This notwithstanding, he predicts that the picture is going to get very ugly as Europe slides deeper into recession next year. The IMF expects Spain's unemployment to reach 15 percent. Immigrants are already being paid to leave the country and he argues that there will be riots in Spain too.

No doubt, he adds, events will be ugly in Britain as well. He could be right, although he adds that he is "certain" that the British people still feel that the authorities who set economic policy are ultimately answerable to Parliament and to the democratic system.

If that is the case, then all that stands between us is a false perception. Our authorities have long ceased to be answerable to parliament – just the theatre remains. When perhaps more people realise that, we will no longer have to watch rioting in distant lands on our televisions (those who still watch them). We will be able to look out of our own front doors.