Creaking at the seams 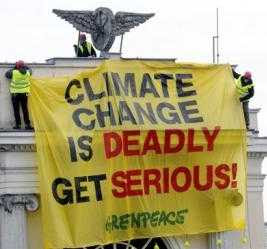 There has been a huge amount of media coverage recently about the talks on "climate change", with both the Poznan conference and the EU coming unstuck as the growing recession hits home.

Nevertheless, it seemed best to hold fire until we see the outcome of Poznan and of the European Council (which actually starts today and runs until tomorrow). Offering a blow-by-blow account is rather like reporting on the gibbering of madmen in a lunatic asylum – and about as interesting. The only problem is that these madmen are running the asylum, and many governments as well.

What particularly struck home, however, is just how many of them there are, with a reported 11,600 participants from around the world at the Poznan beano. One wonders – fleetingly – what they can all be doing but, rather like the content of sausages, it is perhaps best not to ask.

Some – witness the picture above - have clearly been entertaining themselves by displaying a banner from the roof of the town's railway station. One hopes they got rather cold in the process.

However, there is some small hope that the lunatics will be shoved back into their padded cells. Recently, we reported that the EU parliament and the Council had agreed a deal on the Renewable Energy Directive, clearing the way for the approval of mandatory biofuel and renewable electricity quotas.

At the eleventh hour, however, up has popped the Austrian government which has questioned the renewables targets and appears to be threatening the whole Directive. The delicious thing about this is that it had done so after the negotiations between the Council and the EP have been finalised.

The significance of this is that, under EU procedure, since there is now an agreed "common position", there is no mechanism for re-opening the negotiations. This could force the EP to end up voting on a position which is different from that which the Council agrees. Under the arcane rules of the game, that would mean the Directive would fall and the "colleagues" would have to start all over again.

As always, there will be frantic, last minute attempts to stitch up the stitch-up, but there is absolutely no room for manoeuvre if Austria really puts its foot down and blocks the deal. The only way out will be to buy off the Austrian government with concessions unrelated to this particular Directive, which may be the prize which is being played for.

Whatever the outcome of that little drama, it does point to the fact that the "consensus" is creaking at the seams. The "colleagues" may just pull it off this time, but it is becoming clearer by the day that they and their fantasies are living on borrowed time.