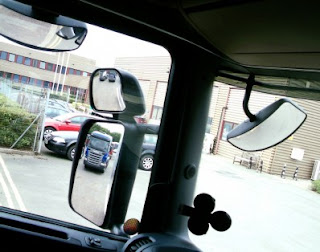 The story then tells us that EU laws have prevented the British Government from compelling foreign lorries to fit mirrors which would radically cut road accidents in the UK. We are then informed that, "A simple device known as a Fresnel lens would eliminate blind spots experienced by foreign heavy goods vehicle drivers."

Government figures, we also learn, have shown that foreign hauliers are eight times more likely to be involved in a serious or fatal accident than their British counterparts on UK roads. Furthermore, the potential of the lenses is recognized by the Department for Transport, which has handed out nearly 200,000 lenses to left-hand-drive lorries as they arrive at British ports.

But, we are further told, the Government is powerless to compel foreign drivers to use them. That much is admitted by Jim Fitzpatrick, a transport minister, in a letter to John Baron, Tory MP for Billericay.

"We are bound by international convention to accept visiting foreign vehicles on our roads, provided they comply with internationally agreed construction and safety requirements," Fitzpatrick writes. "Our international obligations do not allow us to require unilaterally any additional components on these visiting vehicles."

Baron, on the other hand, believes that the mirrors should be made compulsory and complains that ministers have failed to take a strong enough stand. "The Government is taking only limited steps to combat this problem. But it could solve the problem in one go by simply making Fresnel mirrors compulsory. By refusing to do so, the Government is putting motorist's lives unnecessarily at risk."

This seems like déjà vu all over again, as we raided this precise issue on this blog in September 2006. However, in May 2007, we also reported that the issue had been resolved. And indeed, that seems to be the case. We now have Directive 2007/38/EC of 11 July 2007 "on the retrofitting of mirrors to heavy goods vehicles registered in the Community".

The Directive itself requires that member states shall bring into force the laws, regulations and administrative provisions necessary to comply with the Directive by 6 August 2008. The retrofitting must be completed by 31 March 2009, the details of which are set out in this leaflet.

As to the "blind spot" on foreign vehicles, Article 3 would seem to cover this:

1. With effect from 6 August 2007, and not later than 31 March 2009, Member States shall require that all vehicles referred to in Article 2(1) be equipped, on the passenger side, with wide-angle and close-proximity mirrors which fulfil the requirements for class IV and class V mirrors under Directive 2003/97/EC respectively.

The egregious John Baron, seems to have a grasp of this but he then says: "I think the Government is hiding behind EU regulations. We have a problem here and it is incumbent on ministers to do something. They should be pushing for an EU regulation to make Fresnel lenses compulsory on all lorries."

However, he clearly has not noticed that we already have an EU regulation. Furthermore, the mechanism used to introduce it is by way of Directive 2003/97/EC, which is the "type approval" directive.

And here we really do have a problem. It is not the EU which makes the laws on type approval but UNECE. That is why Fitzpatrick writes about "our international obligations …" and not specifically about the EU. Once again, we meet our old friend the "dual international quasi-legislation/comitology mechanism".

To make Fresnel lenses compulsory, therefore, we have to seek an amendment to a UNECE regulation. And, in the nature of these regulations, the provision would have to apply to all vehicles in the EU and wider area, not just those which come over to the UK. In practice, this simply is not going to happen. There is no way all the member states are going to agree to require their whole national fleets to be modified, just to accommodate the UK.

The problem is, though, that there is no other mechanism by which this can be achieved under the current system. Under the EU regime, "type approval" is an "occupied field". We cannot make law unilaterally. We can only implement EU law. But – and here is the ultimate Catch 22 – the EU cannot make law unilaterally either. It must rely on UNECE. And that organisation simply is not going to move on this.

Thus, we have got ourselves in a position where, clearly, a new law is needed, specifically for the UK (and Ireland). But there is no longer any mechanism available to us to make such a law.

Thus we are left with the Department for Transport defending the Government's handling of foreign lorries arriving in Britain. "We have distributed fresnel lenses to left-hand drive trucks entering the country. We are sharing the evidence of this work with European counterparts to investigate how it can be best used to direct policy on HGV design and use," it says.

What is does not say is that there is nothing else it can do. We can "share" all we like, and we can give away – at the taxpayers' expense – free lenses to foreign truckers. But we cannot make them either buy them or use them. And that is the one thing the Department for Transport cannot tell us – that we are utterly powerless.