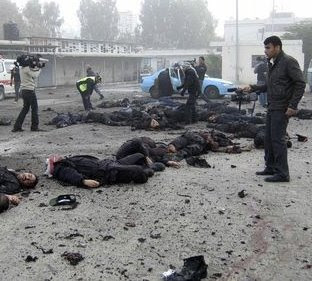 Reviewing the breast-beating in the "liberal" media over the Israeli strikes on Gaza, it occurs that the UK government – and military – should understand completely what the Israelis are trying to do.

In this, there is a singular parallel between the situation in which the British found themselves in Iraq in 2005-6, where their base near al Amarah called Camp Abu Naji was subject to incessant rocket and mortar attack.

Starved of resources, the British Army had little option but to endure - through no fault of its own - occasionally launching punitive raids into the city in the hope of taking out some of the insurgents and affording the camp slight relief from the daily bombardment.

This culminated in the heroic but disastrous raid on 12 June 2006, when a Company-strength overnight raid into the city was met with an estimated 200 Mahdi Army fighters. The ensuing battle (wholly unreported at the time) was reckoned to have seen the most vicious fighting since 2004, in which the Army – with the help of air cover and heroic flying by a USMC helicopter pilot – managed to extract without fatalities.

Brilliantly fought - reflecting the Army (and supporting arms) at its most professional - the raid was nevertheless a strategic failure. Within days, the rocketing and mortaring of the camp resumed and was to continue with increasing intensity until, in August, the British vacated Abu Naji, only to have it ransacked by a jubilant Mahdi Army.

If the British thought this would afford relief – they were wrong. With al Amarah virtually under Mahdi Army control, the city and surrounds became the armoury and workshop for the insurgency. Thus invigorated, the Mahdi Army turned its full attention to British bases in Basra. One by one, the Army was forced to evacuate, until it was hunkered down in its one remaining base in the former Basra International airport.

The lessons from this are simple – and hardly new.

First, if someone is attacking you with the intention of killing you, you must respond with deadly force, killing them before they have the opportunity to achieve their aim. You do not negotiate - you kill them.

Second, a half-hearted response is worse than useless. A failure to deal decisively with the enemy simply encourages them to redouble their efforts. Any response should be overwhelming (what the military call "overmatch") and wholly disproportionate. The objective, as much as anything, is to demonstrate your power and to demoralise the enemy, sending it a message that it cannot win.

Third, appeasement, or the "softly-softly" approach, is doomed to failure. In the macho culture of the Middle East, this is seen by the enemy as a sign of weakness, prolonging rather than ending the agony.

It instructive that, when the Iraqis and US forces finally decided to clear out al Amarah – which they did in June of this year - they sent in 22,000 troops, supported by massive air power. This compared with the British effort, which allocated a mere Battle Group of 1200 men, and minimal air cover.

The US and Iraqi forces gave plenty of warning and told the insurgents to surrender their arms or be killed. When the troops entered the city, not a shot was fired. Enough arms to supply a small army were surrendered.

Therein also lies a lesson for the "international community". As long as they give succour to the terrorists, giving them aid and interceding with "cease fires", thus saving them from ultimate destruction or surrender, they will perpetuate the agony.

There is only one solution to this continuing tragedy – overwhelming, deadly force, sending out an unmistakable, unequivocal signal: "You try, you die!" Only when Hamas get that message, loud and clear – and cannot turn to the "international community" to protect them from consequences of their own murderous behaviour – will the violence stop and the talking start.

That is – or should be – the new deal. Anything else, as the British found in al Amarah, leads you down the road to defeat, destruction and, in the final analysis, more death and misery.