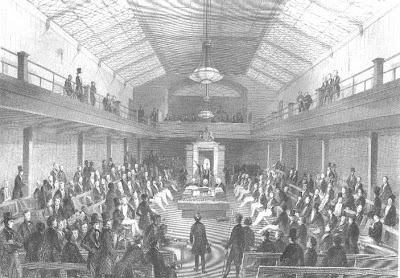 "The privilege of freedom of speech enjoyed by Members of Parliament is in truth the privilege of their constituents. It is secured to Members not for their personal benefit but to enable them to discharge the functions of their office without fear of prosecution, civil or criminal."

Thus writes David Davis in today's Daily Telegraph, citing the words of a House of Commons Privileges Committee ruling in 1939.

We would, of course, agree with that sentiment completely. But the point – and an uncomfortable one it is – is that we heard absolutely nothing from the Conservatives about the "privilege of their constituents" until one of their own was threatened.

Yet, as Booker pointed out in his column yesterday, Parliament's "greatest privilege, the right to make the laws which govern Britain, has now, with their consent but not ours, been all but removed from them."

Today, though, we will see MPs from all sides of the House are getting worked up about "freedom of speech" which, they say, is exercised on behalf of us, their constituents. But this is a freedom they have not exercised in respect of the gradual but consistent erosion of their powers, as the right to make legislation has been outsourced to Brussels.

If criticism on this blog if often directed at the Conservatives in this respect, it is for a good reason. We have no expectations of the Labour government. We did not vote for it, we do not want it, and we want to see the back of it. On the other hand, as a prospective government – and one potentially of our choice, which we are prepared to support - we have high expectations of the Conservatives.

Our dilemma is that, on the one hand, we have the Conservative leader stridently supporting Damian Green who declares "opposition politicians have a duty to hold the government to account".

On the other, we have a Party which, as a matter of policy, refuses to entertain EU issues. It thereby denies by word and deed that a major part of our government is in Brussels and that, in the areas of its "competence", the European Union is our supreme government, accounting for the bulk of our legislation.

Our secondary point, devolving for the first, is that we do not expect the current Labour administration to do anything about the encroachment of the EU. We do expect the Tories to do something about it – if only because they are the only people who can and who have within their ranks people who tell us privately that they would like to.

But it must be remembered that it was a Conservative government which took us into the EEC, that agreed one of the biggest leaps in bureaucracy in the history of this nation in the Single European Act and also rammed though the Maastricht treaty, which set the framework for the current European Union. As an opposition, it is also one that, so far, has refused to commit itself on the Lisbon treaty.

And yes, it is undoubtedly the case that even with this historical baggage, a Conservative administration would be better than the current Labour government, but one is drawn to the view that this is only because it would be impossible for it to be worse.

The trouble is that, aside from issues which both sides care to argue about in the public domain, whichever side is next in office, the bulk of our laws will continue to be made in Brussels. Thus, a change from Labour to Conservatives is not a change of government, but the selection of a Party to take charge of that little bit of government which is left for us to manage.

And, if we have an opposition which refuses even to discuss this issue, much less commit to doing anything about it, it makes it hard, very hard, for us to give it our full support. We would like that to be different and feel impelled to try and make it so. We do so because we care.