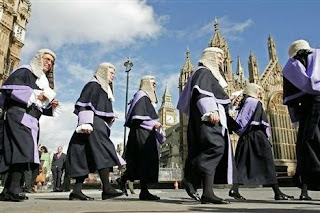 The House of Lords (though, of course, not the highly paid House of Commons) will be sitting tomorrow to debate several matters, including a report published by the European Union Committee in July, entitled “Initiation of EU Legislation”. Even if one disagrees with their choice of witnesses (though, to some extent, this is self-selecting) and some of the conclusions, it is a fascinating document to read as it lays out many of the issues of EU legislation very clearly and cogently, though often admiringly.

The word "accountability" is not mentioned, curiously enough.

At present, I am working on notes for the debate on which I shall report as soon as Hansard publishes the words spoken. In the meantime, let me bring up one interesting point made in connection with legislation to do with justice and the problems common law countries face. Incidentally, this is about the only part of the EU legislation in which Member States can initiate legislation. In all other sectors, it is the Commission.

Paragraph 51 of the Report says:

The Bar Council pointed out that the exclusion of national stakeholders from the Justice Forum carried the risk, in particular, that the voice of the common law systems would not be heard. They drew our attention to a lack of knowledge of common law systems among Commission officials, and problems which occurred where draft legislation, particularly in the fields of police cooperation and civil and criminal justice, was drafted without proper consideration of the implications for common law countries. They gave the example of the Commission's green paper on wills and succession.

Great. Let's simply discard centuries of carefully built up and highly admired tradition because the bozos in the Commission Commission officials know nothing about it. Incidentally, this involves four countries: the UK, Ireland, Cyprus and Malta.

Then again, this is what Professor Steve Peers (Professor of Law, University of Essex) opined:

Professor Peers agreed that the Directorate General concerned with Justice and Home Affairs had relatively few officials from a common law background, and said it was relatively under-staffed. Many proposals have presented huge problems from a common law perspective even where, as in the case of proposals on criminal procedural law and on a European evidence warrant, they had been drafted by English and Scottish nationals, respectively.

English and Scottish nationals? What on earth does this professor of law teach his students? Just don’t send your children to study law at the University of Essex.

The answer to the problem seems obvious to most of us: it is not really possible to create a common system of law for countries that have such different traditions. But that is not the answer that the various witnesses gave to the Committee. This is what Paragraph 55 says:

Professor Peers thought the best solution would be to increase the representation of the common law within the Commission. He suggested that the Commission might consider how it is organised and the way in which it obtains information in the early stages of a proposal, to ensure that different legal traditions are represented. (Q 52) Vijay Rangarajan (Counsellor, UKRep) referred to the Government's work to raise awareness of the common law systems among Commission officials from civil law countries by promoting both training and the secondment of officials from the UK. (QQ 303, 305)

Raise awareness? Isn't that the jargon the Home Office uses when they send police officers for diversity and sensitivity training? It seems that the Member States with common law traditions have joined the ranks of protected minorities. What none of this explains is that whatever awareness may or may not be raised, the policies developed for purposes of integration are unlikely to take common law into account.
Posted by Helen at 14:55