Any which way, we pay 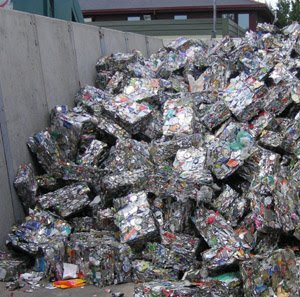 In what could have been a fine piece of journalism, Simon Neville and Christopher Hope in The Daily Telegraph today lifts the lid on the council recycling scam revealing that more than 200,000 tons of recyclable household rubbish is being dumped in landfill sites or sent to incinerators each year.

Furthermore, Neville and Hope tell us, the amount dumped this year is expected to rise sharply as councils struggle to sell recyclable waste during the economic downturn.

The fact the recycled material is being dumped is, of course, not new. It has been discussed on this blog numerous times, and in not a few newspapers. But this is the first time an attempt has been made to quantify the scale of the dumping.

The 200,000 tons though, this is probably an under-estimate, as a lot of the stuff goes to contractors. The local authorities are able to put this material towards their quotas, but a significant amount then goes "through the back door", back into the waste stream.

What is missing from the piece, however – which would really have brought it alive - is any mention of the EU and the fact that we have been saddled with a fundamentally flawed scheme, the inevitable consequences of which we are now seeing.

The clue is in the piece, where we are told that, "… with prices for recycled material falling, increasing volumes will end up dumped or destroyed," but no comment is sought to explain that, with a producer-driven scheme, that was always going to happen.

There is only one way a recycling scheme is going to be successful in the long term and that is by creating markets for the salvaged material, sufficient to pull recyclable waste through the system, rather than push it into the market where there is no assured demand.

In this country, however, it is extremely doubtful as to whether such markets can be developed, given our contracted manufacturing base and our reliance on imports. And, if those who manufacture our goods – and are thus interested in buying our waste - are in recession, and demand falls off, there is absolutely nothing we can do to improve matters.

Therein lies the bind of this being an EU scheme. Has this – or any other – British government been stupid enough to launch such a scheme, it could by now have suspended the rules and reverted to the traditional practice of landfill. But, as The Telegraph points out, there is the small matter of landfill tax.

This is entirely a child of the EU. It was devised by the British government as a means of forcing local authorities to recycle and thus to avoid the swingeing EU fines that will accrue if we do not cut landfill. But, with it standing at £32 per ton, councils are potentially spending an extra £6.4million sending recycling to be dumped. Since landfill tax will rise to £40 per ton next year, the potential cost spirals to £8million.

It is this story that is not told in the Telegraph – it should be, but the sleeping elephant rules. The EU must not be mentioned.

Instead, we get a facile, partisan comment from Eric Pickles, the Conservative local government spokesman. He is allowed to say: "This once again shatters the Government's green credentials. Labour's idea of recycling is dumping huge mountains of rubbish on landfill sites and in warehouses fuelling the 80 million strong rat population. The sad reality is that families who want to go green can't under Labour."

The fatuity of this is obvious. This is not "Labour's idea of recycling". It is an EU scheme and, if there is no market for the material, then there is little Labour or anyone else can do. What would Pickles suggest as an alternative, one wonders. Would he eat the surplus?

There is, of course, the option of producing energy from waste, and for Pickles to have suggested that would have been an intelligent and useful contribution. That is what I would have suggested. But then I am not a Tory politician.

Mind you, there is a comment of similar fatuity from Matthew Elliott, chief executive of the TaxPayers' Alliance. His offering is: "People are constantly lectured on recycling and threatened with fines if they don't comply, so it's outrageous that councils are just throwing the stuff away." And what does he suggest as an alternative?

To be fair, though, the first prize for stupidity goes to the Department for Environment, Farming and Rural Affairs – although it has so many already, it's almost unfair to the other contenders to give it another.

It says: "There is a strong incentive for local authorities and recycling facilities to minimise the amount of contaminated recycling due to the cost of extra material going to landfill as well as the loss of revenue from recycled materials."

And its point is? There is no demand for much of recycled materials produced. The local authorities cannot even give it away. Therefore, there is no revenue to lose, and no option other than to store the materials and then dispose of them, or the cheaper option of abandoning separate collections, disposing of the material straight away and taking the hit on landfill tax.

Any which way, we pay. But it would be nice if a newspaper occasionally told us why.