Sense … but no sense 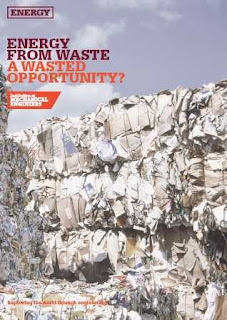 Given that the recycling system has ground to a halt with the collapse of the China market for our rubbish a report from the Institution of Mechanical Engineers advocating the use of combustible (and biodegradable) waste to produce electricity seems to make absolute sense.

Entitled A wasted opportunity, it is picked up by the media today, as in The Times and sundry others, and given a fairly clear run.

Thus you have The Times noting that Ian Arbon, lead author of the report and a visiting professor at the University of Newcastle, says the public were being deceived over the value of recycling. Materials such as metals were ideal for recycling but paper and plastic were worth more as fuel.

So are we told that using waste as a source of energy instead of recycling it has the potential to supply a fifth of the nation's electricity by 2020. Paper recycling "wasn't worth the effort", it is "a nightmare to recycle in this country" but, since "it burns very well", it makes much more sense to burn it.

This is all good stuff until you actually read the report. It offers an executive summary, which is obviously as far as the journalists would have got (although most of them probably relied on the press release) and that rather obscures the real problem.

Happily, it chirps, "The government should redefine waste as an energy resource, allowing the new Department for Energy and Climate Change to focus on its optimal use," so pointing to the underlying issue that waste paper and other such materials are treated, for legislative purposes, as waste rather than an energy source.

What the report does not do, however, is identify what it means by "the government" and here, unfortunately, the whole argument runs into difficulty. The authority in question is not Whitehall (and that useless institution down the road in Westminster) but the European Union.

Alas, the impact of this is buried in the report, and thus missed by the journos. But the message is clear:

Because of public concerns about the emissions from EfW plants, a European Directive on the Incineration of Waste was developed in 2000, which is now almost always referred to as the Waste Incineration Directive (WID), passed into law in England and Wales in 20029 and in Scotland the same year.

Applying WID to a combustion EfW (energy from waste) plant is relatively straightforward in technical terms, but has required substantial redesign of the combustion process technology and is therefore very costly. The net result, however, is that the emission concentrations from a combustion EfW plant are required to be ten times lower than from an equivalent large, coal-fired combustion plant.

There we have it: Directive 2000/76/EC of the European Parliament and of the Council of 4 December 2000 on the incineration of waste. This makes it so prohibitively expensive to use combustible material for energy production that it is more economic to put the stuff on the slow boat to China, or anything else, rather than use it as an energy resource.

But the situation is not that simple - it never is. This is also the dead hand of the bureaucracy of Defra to deal with, as Booker reported, when entrepreneur Ross Donovan tried to develop a small-scale system for using cardboard, an issue that was never satisfactorily resolved.

Certainly, according to the Engineer live magazine, other EU member states seem to manage better than the UK and a number have got successful EfW plants up and running.

Here, there is some relief in Directive 2001/77/EC on "the promotion of electricity produced from renewable energy sources in the internal electricity market", which defines what is acceptable as a "renewable energy source". This allows for the "biodegradable fraction of industrial and municipal waste" to be considered as "biomass" and thence count towards our renewables quota.

Looking at this in context, it would seem a far better idea to burn our paper (and use other methods of producing electricity from biodegradable waste), rather than litter the countryside with wind farms. And, presumably, if burning paper is the use of renewable energy, then operators can take advantage of the renewables obligation subsidy. But as long as Defra seems to labour under the impression that waste paper used for EfW comes under the EU's waste incineration directive, this is a non-starter.

Perhaps, when the Westminster parliament has finished discussing its "privileges", it might do something useful. It could perhaps find time for a debate on this issue, spending just a tiny bit of its valuable time "holding the government to account" on what seems to be its lamentable performance in this area.

That might require a little work on the part of our MPs, and the poor Tories would have to gird their loins and talk about the EU, but such a debate could yield dividends. Until then, the report from the Institution of Mechanical Engineers, sense though it is, makes no sense.