The four horsemen for hire 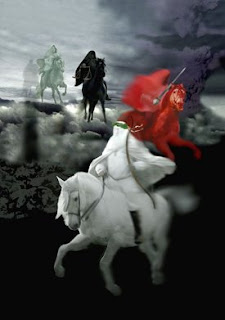 War, hunger, poverty and sickness will stalk humanity if the world fails to tackle climate change, the 12-day UN conference on global warming at Poznan was told yesterday. Simultaneously – in what cannot be a coincidence – we have the government's "global warming advisor" warning that, "It is not too late to tackle climate change, but it will be unless the world takes action soon".

This is from a report by The Committee on Climate Change, chaired by Lord Turner, but what grabbed The Daily Telegraph's attention was the committee’s acknowledgement that the higher electricity and gas prices created by investment in renewables "could push a further 1.7 million households into fuel poverty".

But never mind, says Turner, 400,000 of those could be lifted out by energy efficiency measures in their homes, which just leaves 1.3 million households driven into fuel poverty by a policy which seeks deliberately to raise energy costs in order to reduce consumption and thereby emissions.

However, the drive for renewables, funded by the hidden "renewables obligation" subsidy system is only one component of the raft of extra costs. The other major element is the EU's emission trading scheme which, two weeks ago, netted Alistair Darling a cool £54 million. He is set to scoop up another £1 billion over the next four years.

Writes Jonathan Leake of The Sunday Times, "we are witnessing the birth of the greatest and most complex commodity market the world has seen." The ETS is part of a global "carbon permits" market which, last year was worth more than £55 billion. Future trading volumes, if all goes global according to plan, will dwarf these.

Yet, as Leake observes, carbon trading shows no sign of achieving its purpose: CO2 emissions have increased, not slackened, since the first trading schemes. He even quotes Jim Hansen, director of the Nasa Goddard space centre who believes carbon trading is a "terrible" approach. "Carbon trading does not solve the emission problem at all," he says. "In fact it gives industries a way to avoid reducing their emissions. The rules are too complex and it creates an entirely new class of lobbyists and fat cats."

This, we ourselves have observed, pointing up the fact now recognised by Leake that the whole system is nothing more than a money-making scam. But neither he nor anyone else, it seems, is making the final link between increased energy costs, greater fuel poverty and then, as we pointed out, increased cold weather mortality.

To add to this burden, there is also the added burden of carbon capture, with Turner recommending that the government should not allow the use of coal for electricity generation without carbon capture technology beyond the early 2020s. New coal-fired power stations, he also says, should only be built with the "clear expectation and certainty" that they should be retrofitted with carbon capture.

If we also factor in that the world, at this time, seems to be undergoing a period of cooling, reducing food supplies and adding considerably to domestic fuel bills, as well as increasing competition for scarce resources, we could easily make the case that the global warming scam, in adding to economic stresses, could trigger war, hunger, poverty and sickness.

For the moment though, it seems that the four horsemen of the apocalypse are out for hire, and the "warmists" are paying better. But then, with our money being plundered from our pockets to pay for their scam, they have an unlimited purse.