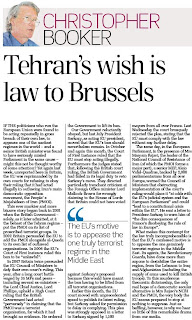 Unless you know different, Booker does not seem to be up on the Telegraph website, so here it is in full - part 1. Or click the pic to the left if you want to read it "as is"...

If the politicians who run the European Union were found to be acting repeatedly in gross breach of their own law, to appease one of the nastiest regimes in the world – and a senior British minister was found to have seriously misled Parliament in the same cause – might this not be thought worthy of some attention? Yet again last week, unreported here in Britain, the EU was reprimanded by its own courts for refusing to obey their ruling that it had acted illegally in outlawing Iran's main democratic opposition movement, the People's Mujahideen of Iran (PMOI).

This ever murkier and more bizarre story began back in 2001 when the British Government – solely, as it later admitted, at "the behest of the Teheran regime" – put the PMOI on its list of proscribed terrorist groups. In 2002 Britain persuaded the EU to add the PMOI alongside Al Q'eda to its own list of outlawed organisations. In 2006 the EU's Court of First Instance ruled this ban to be "unlawful".

In 2007 Britain twice persuaded the EU Council of Ministers to defy their own court’s ruling. This year, after a long court battle brought by 35 MPs and peers, including several ex-ministers, the Lord Chief Justice, Lord Phillips, upheld a High Court ruling that the British Government had acted "perversely" in claiming that the PMOI was a terrorist organisation, for which it had brought no evidence, ordering it to lift the ban.

Although our Government reluctantly obeyed, last July President Sarkozy, as acting EU president, moved that the EU's ban should nevertheless remain. In October and again this month, the Court of First Instance again ruled that the EU must stop acting illegally. Furthermore the judges stated that, following the British court ruling, the British Government had failed in its legal duty to veto Sarkozy's move. They directed particularly trenchant criticism at the Foreign Office minister Lord Malloch-Brown for falsely claiming to the House of Lords that Britain could not have voted against Sarkozy's proposal because this would have meant the ban having to be lifted from all terrorist organisations.

Earlier this month the EU court moved with unprecedented speed to publish its latest ruling, but Sarkozy asked for permission to delay in complying - a plea strongly opposed in a letter to him signed by 1160 mayors from all over France. Last Wednesday the court brusquely rejected Sarkozy's plea, stating that the EU must comply with the law without any further delay.

The same day in the European Parliament, in the presence of Mrs Maryam Rajawi, the leader of the National Council of Resistance of Iran (of which the PMOI forms a major part), a senior MEP, Alejo Vidal-Quadras, backed by 2000 parliamentarians from all over Europe, warned the Council of Ministers that obstructing implementation of the court's ruling would place it "at odds with the EU's judicial system and the European Parliament" and could "lead to a constitutional crisis within the EU". He sent a letter to Presidenr Sarkozy to warn him of ‘the dire consequences of France's disobeying the rule of law in Europe."

What makes this reckless contempt for the law truly incomprehensible is that the EU's only confessed motive is to appease the one genuinely terrorist regime in the Middle East. Its agents, the Revolutionary Guards, have done more than anyone to destabilise the entire region, from the Lebanon to Iraq and Afghanistan (including the supply of arms used to kill British troops), To this murderous theocratic dictatorship, the only real hope of a democratic secular alternative is Mrs Rajawi's NCRI and the PMOI, the very body the EU seems prepared to stop at nothing to suppress. Just as baffling, however, is why we hear so little of this remarkable drama from our media.