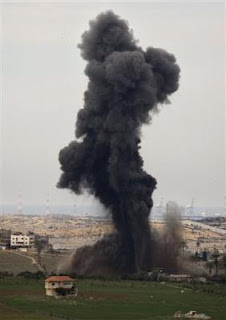 There is only so much you can write on any subject before you start repeating yourself, to the point where you are boring both your readers and yourself.

That may be a terrible indictment of the human condition but, as one views the latest Israeli attack on Gaza, the feeling of déjà vu and deadly ennui combines to make you want to turn away and write about something else.

A small cheer for the Scottish Sunday Herald therefore, which heads its leader with the title, "Toothless talk can't solve Israel conflict". It then goes on to note the "apparent impotence" of the so-called "international community" when faced with such a crisis.

"Impotence" is a good word in this context. We have the ritual statements from the UN, from the EU, from the United States and all the others piling in to add their penn'orth, but nothing ever happens – nothing changes.

Be it Zimbabwe, Sierra Leone, Gaza, DRC or any number of hotspots where fighting or another humanitarian crisis (or both) can break out at any minute, the only response we can count on is a torrent of verbiage from the media and masses of hot air from the politicians.

The Herald's answer to this is that we should be looking for ways to give the United Nations, African Union or whatever regional or global body responsible, the resources and political teeth to implement diplomatic and military measures, when nations, states, or organisations flagrantly defy the collective good and well-being of the majority.

Perhaps the real answer, therefore, it to recognise that the current world order is not working, and has not worked for some time - if ever. We have had, since the Second World War, the tranzie doctrine of the "united nations" acting collectively, and it has failed.

That suggests that we also need a new paradigm. Maybe it would be a good idea if we gave "national interest" another chance, allowing those involved to take whatever action they felt necessary, with the rest minding their own businesses.

As with Afghanistan, there are plenty of those who have opinions, but precious few who are prepared to put real resources into helping solve the problems. Thus, in a new world order, those who "do" should be allowed to do, and the rest – like the incessantly posturing EU – should simply shut up and keep out of it.

The result may be bloody, but is what we have really any better?