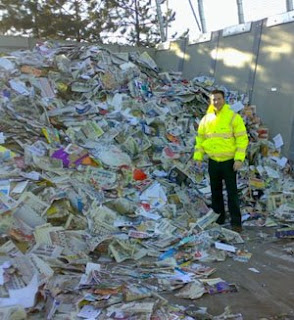 Following the recent report on the (partial) collapse of the waste recycling system in the UK, we have a classic response from Jane Kennedy, the "Environment Minister" telling us, "It is very important that we all continue to recycle what we can." Thus she trills, "We really don't want recyclable materials to end up in landfill."

Then, heedless of the fact that more and more of recycled material is finding its way either into storage or tips, she betrays her fantasy existence by proclaiming: "Recent figures are to be celebrated." Ninety per cent of local authorities in November were meeting or exceeding their recycling targets, she announces. "England alone recycled 9·7 million tons of municipal waste in 2007-08."

Then we get the tribalism: "It's a pity,” she adds, "that the Tories won't commit to helping and working constructively with them. Many householders and local authorities have got the reduce, reuse and recycle message and are doing a great job. The government will continue to support them in their efforts."

This is in Soviet territory, redolent of the "tractor production" targets. The woman is equating her "targets" with reality. Because the waste is collected and weighed does not mean that it is actually recycled. As is increasingly the case, it is not. But such is the narrow, fantasy world of Mz Kennedy, that to her, all that matters is achieving her "targets".