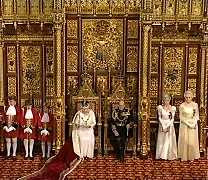 It was a sad day for me yesterday, doing something I will only ever have to do once in my lifetime – attend my mother's funeral.

The death of the person who brought you into this world is something of a milestone in anyone's life, and it gets you thinking about what really is important and what is not. Too often, I sense, we chase after the things that seem so pressing at the time and neglect things (and people) to which we should give far more time.

It is no contradiction though that one of the first things I should do on returning home from helping, with my brother, to put my mother's body into an incinerator – in a building we euphemistically call a crematorium (which is still subject to EU emission regulations) – is sit down to write a very political post.

My mother was intensely political, in a non-partisan way, with a cutting wit and a way with words which could shred the pomposity and hypocrisy of contemporary politicians. That ability, I fear, she passed on to me – one that has dogged what passes for a political career and ensures that I will never progress.

Another thing she taught me was how to think for myself. That is more a curse than a blessing these days, when it is so much easier to absorb opinions ready-made and run with the crowd, but at least I can sleep at nights in the certain knowledge that the mistakes I make are my own.

Thus endowed, I could not resist reviewing the latest offering from Anthony King in what is now yesterday's Daily Telegraph. His piece is headed, "As the Queen opens Parliament, the chasm between politics and people widens," with a pull-quote which sums up his thesis: "Our scepticism about politicians has morphed into contempt".

Had my mother been alive to read this (although it is unlikely she would have read it – she had long ago given up on The Telegraph) she would have tossed the paper aside with the – dare I say it – contemptuous comment: "He's noticed, at last!"

Better late than never, though, and King is right. I was reared by my mother on a healthy scepticism of politics and, over the years it has indeed morphed, first into cynicism and now contempt. And it truly must be universal if King – in his own little bubble – has noticed.

In an otherwise laborious piece, though, one paragraph stands out, the second, where he states:

… the truth is that the deepest divide in British politics today is not between Labour and the Tories; or between Speaker Michael Martin and irate backbench MPs; or between members of Gordon Brown's Cabinet and each other. It is between Britain's whole political class and the great majority of the British people. On the far side of a chasm stand politicians of all parties and their hangers-on. On the near side is almost everyone else.

This is more or less what we've been writing on this blog for ages, trying to point out to the chatterati and the politicos that they are so ensconced in their impenetrable bubbles that they have lost the ability to realise how out of touch, and how detested, they really are.

Oddly enough, we published a piece on this blog, well over a year ago, headed "us and them" – precisely the theme which King rehearsed yesterday. It was that same theme which I aired in Tuesday's piece, with the title "From outside the bubble". Between us, we have rehearsed this theme so often that we sound more like an cracked 78 record, yet it remains relevant, for all the repetition.

However, there are serious problems with King's piece. Amongst other things, he does not mention the "elephant in the room" and the marginalisation of parliament that the devolution of its powers to Brussels has brought. While he complains that "our system of government is failing to perform adequately", he himself fails entirely to recognise (or even acknowledge) that our system of government now includes the European Union as the dominant player. And neither does he seem to understand that the two are connected.

As a result, he clearly cannot see that, having devolved most of the real governance of this country to Brussels, MPs have very little serious work to do. The thinness of the Queen's Speech illustrated that – little of any real substance. Yet the "big issue" over the water is the CAP "reform", about which Bruno Waterfield wrote yesterday.

Can anything better illustrate how far down the line we have gone when the main preoccupation of MPs yesterday was the Damian Green affair, and the protection of their "privileges"? Yet, the loss of their essential privilege (if you like to call it that) of making the laws in this country has completely passed them by.

Had she been alive, my mother would have enjoyed the comparison. As a Land Army girl during the dark days of the Second World War, she had first-hand experience of the importance of agriculture to this nation – an importance that has not diminished with time. Yet when did we last have MPs debating an Agriculture Act in parliament?

Thus, when the self-important David Cameron defended his little pal Damian Green, declaring that parliament was "here to hold the government to account and to publish information that is in the public interest", I am sure my mother would have loved to ask him how parliament can indeed hold the government to account when so much of it is in Brussels.

Come to think of it, I would dearly like to ask Mr Cameron that, myself. Perhaps one day I will get the opportunity. And when answer there is none, I would like to think that my contemptuous smile is worthy of my mother, my teacher.