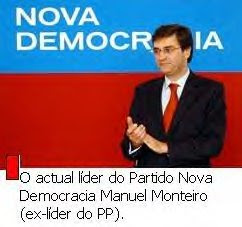 It is rare for me to find anything to write about in the European Journal, which is full of Tories and Tory wannabes. Having worked in the European Foundation myself years ago, I can work out relatively easily who actually is responsible for Bill Cash's grand pronouncements.

However, the issue that landed on my doorstep today did have one interesting article, entitled "The Sovereign State", by Manuel Monteiro. Señhor Monteiro is, apart from being one of the numerous "advisers" the European Foundation boasts of, the President of the Portuguese "New Democracy Party", of which, one assumes, Commission President Barroso is not a member.

First port of call, Wikipedia, tells one relatively little about the party but the link to Manuel Monteiro himself does show us a politician who quite likes founding parties and then leading them on until something goes wrong. Well, I suppose, it was only one before the New Democracy Party but it seems to have had a turbulent history.

The official site is in Portuguese, which is not one of my languages, so I need to rely on other people's translation. But I have sent a missive to a very political friend in Portugal, asking her to tell me what she knows about this lot. There may be updates on the story.

Anyway, it is described as a "liberal-conservative" political party and I was left with only one course of action: reading the article. It has a slightly Hegelian air about it and talks much of the usefulness of the state and the highest expression of it, the Nation state.

The utility of the state leads to its necessity. The state is necessary to humans and as such is essential to the autonomous maintenance, and also freedom of the Nation. If, for us, the human has more difficulty in his realisation without the feeling of belonging to a Nation, in the same way the Nation succumbs without the possibility of individual political expression, of its collective will. It is not by chance that, presently, the majority of Nations without a state look for it and want to have it. In the Nation we concentrate our strengths; through the state we attenuate our fragilities. With the Nation, we divulge what we are and desire to be, with the state we defend what we already possess and we create conditions to safeguard what we have to possess.

The state, reflecting the manifestation of people's independence, projects its particular decision in the choice of a political destiny. The necessity of the state does not offer any doubt for its preservation, as its political value must be latent in the political action.

Before anyone tells me that it is not the British way to argue about political abstractions, allow me to remind our readers that almost all non-Classical political philosophers from John of Salisbury onwards, have been English, Scottish or British. In fact, there was a time when politicians in this country could hold their own in political philosophy though they are unlikely to have been disciples of Hegel or users or Marxist phraseology such as "it is not by chance that …".

I have problems with any political argument that puts the state, any state as the finite good. Even the Nation state is not necessarily a good thing, since plenty of nation states have governments that are not in any way accountable to the people.

Definitions of nations are notoriously difficult and geographical divisions slippery.

It cannot be said that the affirmation of any sovereignty opposes or makes difficult the construction of a world without barriers. On the other hand, thinking that the sovereignty of the economically strong Nations will some day disappear, or effectively would be self-limited, passes as a mirage. And the reason is simple: to erase the sovereignty of the Nations is to oppose the nature of things and to oppose to the normal course of history. Having removed any idea that leads to the isolation or to the refusal of sharing and frank opening to the world, we must support the nation state, with sovereignty, considering it of political value to the present century.

As man has developed, so has the state, as well as its sovereign function, adapting to new times. In fact, if it were not for that adaptation, no change would have been perceived. To distrust the state and fear the sovereignty is to have a negative and pessimistic vision of humankind. It is not our case. We believe in the free man and therefore we are not suspect of its political will.

It is from this reflection that we continue to support the profound difference between a Europe of free states and a Europe that walks towards a single state. Therefore, we continue in no giving our support to the Lisbon Treaty.

I can't wait to see what Señhor Monteiro's next political party is going to look like. The notion that a belief in the free man (I am making allowances for the fact that English is not his first language and I think it is clear what he is saying here) means not suspecting the state's, even in its Nation form, political will strikes me as a little odd even for someone who must have had very left-wing professors of political science (they all are).

And, of course, while not supporting the Lisbon Treaty, in which we concur, the author is handing a wonderful argument to the other side: the state's historic adaptability. After all, one can argue, if it is to adapt for the present century, why not let it do so by becoming a European state. After all "single" is not the opposite of "free".
Posted by Helen at 17:15