There is more to it … 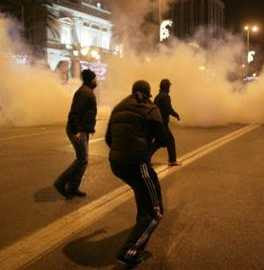 … the sheer scale of the destruction has put the ruling New Democrats on the defensive. "It is as if the state [machinery], the government, has collapsed," said Ioannis Rougissis, a spokesman for the opposition Pasok party.

Papandreou lashed out at the New Democrats - who are in power with a wafer-thin majority - for being out of touch with reality. "The whole country, every citizen, is exasperated with a government that doesn't understand the real problems of the people," he said. "Everyone is saying enough is enough."

With many struggling to make ends meet, and one in five living below the poverty line, there is growing anger at the tough fiscal policies of a government determined to reach the prescriptive benchmarks set out by Brussels and rein in budget deficits. The disaffection has been exacerbated by allegations of corruption and a series of scandals implicating members of [prime minister] Karamanlis's inner circle.

Yet interior minister, Prokopis Pavlopoulos, is saying: "We will not tolerate these events …". He speaks like a eurocrat.

"Fear and despair are what these riots are about," the Guardian piece ends. This may not be simply riots we are seeing. This could be revolution – the revolt of the masses against the corrupt élites.

From our Greek correspondent, though, we get an interesting insight:

The Greek government have recently curbed the powers of student organisations to control how universities are run, and they have been sitting on a 'powder keg' ever since. One thing is clear: this has been building up for months, waiting for an opportunity - I had seen the initials "ACAB" appearing with increasing frequency in dialogues amongst Greek youth (ACAB = All Cops Are Bastards).

Immigration in Greece is larger than the 10 percent you indicate: probably nearer 13-15 percent, but immigrants in Greece don't riot - they keep their heads down. Their lives in Greece are far too precarious to risk being involved in such matters. Riots are the domain of the 'usual known suspects' as they are called in Greece: the anarchists, leftists (there are plenty of those), and students with nothing better to do.

One remembers that the 1968 riots in France started in the universities. History never repeats itself exactly, but ...