The cult of personality 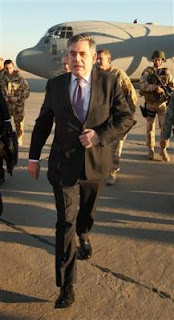 Difficult few days recently, starting a new chapter of the book – number six - and having difficulty getting it flowing. With the Snatch issue flaring up again, writing a post on that took a huge chunk out of yesterday. Hence, this morning I decided on a "heads down" to crack the writing block, and am back flowing again.

That explains a late posting today, with the project forcing me to ration the posts to about two a day, which makes for an interesting problem each day as to what to select from the daily torrent of news as the most appropriate subjects on which to expend the time.

The slight (alright, almost complete) detachment from the day-to-day political theatre though lends an interesting perspective and one tends to see things if not more objectively, certainly from the point of view of the more normal mortal, who does not wake up thinking about politics and then spend the whole day ruminating (or even fulminating) about them.

From that perspective, what caught the eye this morning (apart from an article that said Brown’s bank bailout wasn't working) was a column from Irwin Stelzer arguing that – if I have understood him correctly – "we" (presumably the political classes) should be cautious about heaping personal abuse on Gordon Brown, and instead look at "the bigger picture".

The prime minister is an "easy target" – too easy – so we should instead admit that he has got some things right or that, where there were alternative courses of action, those alternatives would not necessarily have worked better that those which were applied.

However, Stelzer is now suggesting that "as David Cameron and George Osborne muster the wit and courage to forge a coherent alternative economic policy", rather than attack the persona of Gordon Brown, we should devote our energies to comparing the alternatives on offer. Then, one assumes – although this is not said – we should come to a judgement based on that comparison, rather than simply on the basis of an antipathy towards Brown.

If I have got this right, it is an intriguing thesis, and one that has a certain attraction. And it may be more politically astute than some of the commentators on Stelzer's column aver – some describing him as an "apologist" for Brown.

Effectively, Stelzer may be tapping into the mainstream – not the highly vocal "pub bore" tendency or the dominant "forum queens" on some of the political blogs, laying down the law about how terrible Brown is and how we should all hate him.

Most ordinary people (who form the bulk of the electorate) don't think that way. There is not the black, tribal hatred prevalent in the Tory camp, which assumes that because they hate Brown so much, everybody else must. This route to salvation is to "spread the hate", the consequence being that the Tories fall naturally into office at the next election, a doctrine which finds less favour out in the real world.

With the poll gap narrowing between Labour and Tories – Cameron seemingly having lost his "unassailable" lead - Stelzer's thesis might at least allow some pause for thought. With Cameron at the helm, political discourse has of late very much relied on the "cult of personality", so much so that even Tory Diary is expressing concern about Cameron "giving too many speeches".

In a nutshell, politics is traditionally about the battle of ideas rather than personalities, and I take it that Stelzer is saying that we should return to that concept. I would like to think he is right, and suspect that many people would agree. What an intriguing prospect that would be – politicians arguing about ideas instead of personalities. Is that even possible any more?