A plea for help 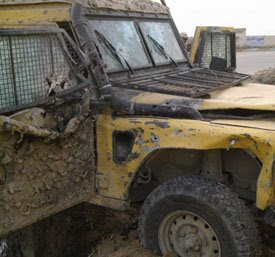 Regular readers will have noticed that the volume of posts on this blog has declined somewhat over the past few weeks. The explanation is simple – with Booker, I am currently engaged in writing another book on "global warming" adding, this time, a detailed analysis of the coming energy crisis.

As if this was not enough, I am also writing solo a book on the Snatch Land Rover and its role in the Iraq and Afghani campaigns. This is more than just a book about a vehicle though. The Snatch, in its own way, was an icon which symbolised the lack of preparedness for a messy and dangerous series of counter-insurgency operations.

Thus, the book is turning out to be a comprehensive account of the Iraqi insurgency in the British sector, whence I will move on – perhaps – to Afghanistan. It is possible though that the experiences in Iraq alone will take up the whole of this account.

Inevitably, this self-imposed burden means that I have less time to devote to the blog, which had developed almost to the extent that it had become a full-time job in its own right. This is more the case as, when researching for a book, I obey the classical precepts of letting the facts tell the story.

Thus, unlike much of contemporary so-called science, where the researcher decides on the outcome in advance and then selects the facts to prove the a priori hypothesis, I am trawling through contemporary sources and assembling a narrative, from which I will then draw my conclusions.

As such, the writing is a journey of discovery (the outcome of which I cannot as yet predict – although the shape becomes clearer as I progress) the detail of which is already staggering. I am ashamed of my own ignorance.

In making this journey, I am applying the same techniques which I learned when at the age of 40 I undertook the arduous process of studying for my PhD. Initially, I recall, my view was that writing a thesis was simplicity itself. I was already a published author and long pieces of writing were no sweat – or so I thought.

In a matter of a few months – of what was supposed to be a five-year (part-time) course - I dashed off some 40,000 words and proudly presented the document to my supervisor. His response was to rip it to shreds, clinically dissecting its failings in such a masterful fashion that, defensive though I was, I could not help but agree. I tore up my work and started to learn.

I have to admit that completing the thesis, which eventually ran to 80,000 words, nearly broke me. After four years and some more, despite the investment, the sheer labour and the rigorous discipline had me prepared to walk away from the whole thing, with only the conclusion section to complete. I have since spoken to other PhD students and many went though the same trauma.

Complete it I did, however, and I applied the hard-won skills to the research I conducted for The Great Deception, written by Booker on the basis of the briefs I provided him. After the two years that that took, I vowed to myself "never again", such was the labour and the gruelling intellectual effort. Yet, here I am, doing exactly the same thing, albeit on a completely different subject.

It occurred to me however, as with the exploration of the Qana incident in July 2006, that I could enlist the power of the blogosphere and make this a co-operative effort, as we did the final report.

For those that are interested and prepared to help, what I am after is media, agency and other reports of events – factual accounts, not opinion – from as wide a range a sources as possible, in the British occupied sector of Iraq, currently for the first six months of the year 2005, with special reference to al Amarah and Basra.

As our forum so often illustrates, many of our readers have quite remarkable internet search skills and, if anyone is prepared so to do, I would appreciate them posting links to stories for the relevant period on the thread I have opened up.

In the meantime, for the time it is going to take me to complete the work, I will keep the blog going as best I can, and plough on with the writing. My thanks to you all for visiting the site and bearing with me.

I have cross-posted this on Defence of the Realm, a blog which I am – much to my own frustration – sadly neglecting. However, I will shortly post there, the next chapter of the work in progress.