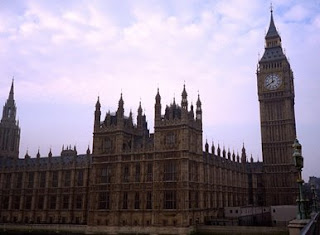 Charles Moore is rampant in The Daily Telegraph today, giving vent to his tribalism as he gives "New Labour" a good kicking. But buried in his diatribe are some sobering words. Of the Speaker, and of parliament as a whole, he writes:

Mr Martin does what so many MPs have done in the face of the draining of powers to Europe, Whitehall, the courts and the media. He has settled for bigger offices, more pay, larger expenses and a massive pension - preferring a mess of pottage for himself to the birthright that is ours.

It has been saddening in this rumpus to see how little the general public seem to mind the mistreatment of Parliament - saddening, but understandable. We believe less and less that it belongs to us: we are right.

I am actually mildly surprised that the great Charles Moore has so correctly divined the wider sentiment but he is absolutely right when he notes "how little the general public seem to mind the mistreatment of Parliament."

Away from the pompous, self-regarding Tory claque that infests the blogosphere and the comment sections, this is exactly the case, as I tried to point out in my earlier piece. Far from universal outrage over the presumed breach of parliamentary privilege, what I discerned was amusement, observing that most ordinary people rather enjoyed the prospect of an MP's pad being turned over by the Old Bill.

Interestingly, Moore refers not to the "privileges" of MPs and parliament, but to "rights" and it is undoubtedly because MPs as a collective are so heedless of our rights that we care so little for theirs.

The most important of ours, of course, is the right to have a legislature which makes our laws and is accountable for them, rather than outsourcing them to Brussels and the legions of anonymous officials in Whitehall and elsewhere.

Taking Moore's piece in the round though, I would not disagree with his condemnation of New Labour. But what I dislike about Tory tribalism is the easy fiction that history begins in 1997. It is this that allows all the ills of our society to be laid at Labour's door.

The processes by which the authority of parliament has been eroded, however, started long before Labour took office, not least in 1972 when we joined the EEC - under a Conservative administration. Another giant step in its decline was the ratification of the Maastricht treaty, where John Major rammed through the amendments to the ECA in the teeth of opposition from his own party, a trauma from which the Conservatives have still to recover.

But another gigantic step was Thatcher's ill-conceived reforms of the civil service with introduction of "Next Step" agencies in 1988, and in particular the creation of "sefras". These, above all else, broke the link between parliamentary accountability and huge tranches of public administration.

That, combined with the increasing resort to Statutory Instruments – which saw its biggest leap forwards in the Major era as a handy mechanism for introducing EU law without the inconvenience and embarrassment of a parliamentary debate - and the scene was set for New Labour, which has continued rather than started the process of decline.

The other neglected issue is the nature of our parliamentary system which is, at its very heart, adversarial. The system relies not only on good government but good opposition. The one goes with the other to make a whole.

It is here that we as a nation have been so badly let down. Not only have we had to suffer a uniquely bad government but we have been thus saddled at a time when the opposition has also been weak and ill-directed. The failures we see, therefore, are not simply those of the government but of the system as a whole, the lack of robust and effective opposition being a significant contributory factor.

Whether or not the situation is recoverable, I do not know – I rather suspect it has gone too far down the road to destruction. Certainly, it is going to take a lot more than a debate on Monday. What will make the difference will be when MPs start to realise that they are in parliament not to defend their rights but ours.

Frankly, I do not see this happening and until it does, there will be very little general sympathy for MPs, even if the Old Bill turns over the whole damn lot of them. It is rather a variation on the theme of "mind over matter". We don't mind, because they don't matter. And they don't matter to us, because we don't matter to them.