From outside the bubble 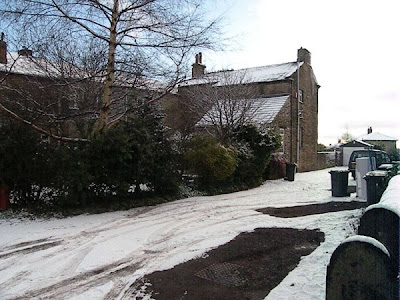 Waking this morning to a coating of snow, with the central heating thermostat control jammed up against the stops in an attempt to ward off the Arctic chill, one greets the news that the great Lord Turner is happily warning us of increased fuel bills to ward off "global warming" with a distinct lack of enthusiasm.

A mere 200 miles from London, it really is a different world here, and the further news that, last week, the Climate Change Bill received Royal Assent and thus becomes law of the land, is greeted with a certain amount of incredulity, inviting shakes of the head and a bemused expression normally reserved for the actions of a lunatic.

Incidentally, if you look carefully at the right hand side of the picture – of a not untypical Bradford back street – you will see two old fridges dumped outside one of the houses. We have one of them in our road as well. They are a standard part of the street furniture round here – the Council won't take them away and no one is prepared to pay the small fortune needed to get rid of them.

Mind you, this is a neighbourhood which – away from the frenetic, self-serving bubble of Westminster, and the squawks of indignation at the treatment of Mr Green – rather enjoys the prospect of an MP's pad being turned over by the Old Bill. Most of us here have enjoyed the attentions of Yorkshire's finest and it is nice to see our elected representatives sharing our pain.

Should Green ever be banged up, the most probable reaction will be to ask when the other 600 or so will join him. You will not get any complaints here if the whole damn lot of them are locked up, much less any accusations of a police state, with Stalin-like tendencies. Only the "poofters daan Sarf" expect their police to be anything other than thugs in uniform - and even the dustmen seem better dressed.

Something of this is undoubtedly reflected in the ComRes poll conducted for The Independent. This puts the Tories on 37 percent and Labour on 36, with the Lib-Dems on 17. These figures, we are told, would give Gordon Brown an overall majority of 10 if repeated at a general election.

This, of course, is a rogue poll. Of course it is. But, a week ago, we were suggesting that Labour's pre-budget report might play better with the lower orders – the ignorati as we put it – than the clever-dick chatterati were prepared to admit.

Needless to say, we were shouted down, but an interesting facet of this current "rogue" poll is a strong surge in Labour support among the bottom social group. The DE group has risen from 35 to 51 percent over the past month while Tory support among the same group has dropped from 39 to 25. Labour's backing among C2 skilled manual workers has grown from 23 to 35 percent.

Perhaps significantly, even if it is a rogue poll, the number of "natural Tories" who intend to support their party has also fallen from 95 to 91 percent. And the Tory cause won't have been helped by the appearance of the well-groomed Tory Boy Christopher Galley on the telly last night – so confident of his "cause" that he remained silent and allowed his highly-paid lawyer Neil O'May to do his talking for him.

Thus it was his lawyer who told the world – or that small bit of it that could be bothered to watch – that the information leaked by Galley was "important for the public to know in an open and democratic parliamentary system." We are also pleased to learn that "as a shadow minister for immigration and as a Member of Parliament, Damian Green received the information in the same spirit and used it in his parliamentary duties." And the other one has bells on.

Up here in the sticks, though, we don't understand such subtleties. We ain't clever like what all these other bloggers are, having "lost our marbles" long ago. However, it may come as a shock to them that all the pub-goers see here, as they stand outside in the freezing cold to smoke their fags, is another "Tory prat" getting his comeuppance.

But then, it really is a different world 200 miles outside the bubble. Little Galley's lawyer yesterday burbled about his leaking being a case of "don't shoot the messenger". Here, we're not leaking – just pissed off. And it looks like, according to this totally rogue poll which don't mean nuffink, that the messengers here and elsewhere are shooting back.