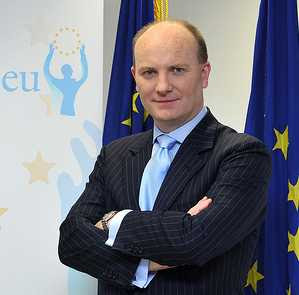 There was a sense of unreality in the report last night, headlined: "World hoping for EU global warming deal," another of those lurid misstatements churned out by AP.

However, from the copy, you do get a sense of how self-important our "European Union leaders" are, when the delicious AP tells us that, with "the world watching" our revered "colleagues" were under pressure "to seal an ambitious deal slashing greenhouse gas emissions". At least the agency has then adds: "… while their economies slide into a slowdown."

Strangely, outside this bubble of "climate groupies" one does not see in the rest of the media any indication that this is the world-shattering event that the participants make it out to be.

You thus have to smile when you are told that "an EU deal could galvanize United Nations global climate talks that failed to make progress in Poznan," and then hear Swedish prime minister Frederik Reinfeldt earnestly declaring: "I came from Poznan so I know that they are actually sitting and waiting for a European response."

Another self-important man also pitched in yesterday, with his own concerns – not unrelated to those of the "colleagues", albeit in a different field. This was Declan Ganley, chairman of Libertas, who managed to pack a press conference in Brussels, then announcing that his organisation, which successfully contested the Irish referendum, is now to contest the European elections in 2009 "on a Pan-European basis".

The Libertas website offers the gist of what Ganley had to say, his main pitch being that, "If people want a strong and healthy Europe that is democratic and answerable to them, they should vote for a Libertas candidate."

On the other hand, he says, "If they do not want Europe to succeed or if they are happy with the current undemocratic practises, then they should vote for an incumbent party. For those who weren't given a vote on the Lisbon Treaty, this will be their referendum".

Wrapped in the EU flag, he does of course mean the "European Union". And, in arguing for an EU that is "democratic" and "answerable" he is, unfortunately suffering from an advanced case of barking cat syndrome. If the EU was either "democratic" or "answerable" or both, it would no longer be the European Union but something else.

A surpranational government, which is what the EU is, could not, by its very nature, exist with those characteristics. But then, the tautology implicit in the use of the two words – the second certainly being dependent on the first – suggests that Mr Ganley is more concerned with sloganising than precision.

If anything, though, he shares the same sense of unreality that afflicts the climate groupies, in thinking that what he represents is actually important. The reality is though that EU member states economies are not so much sliding into a "slowdown" as an abyss. Like it not, the economy is going increasingly to dominate peoples' thoughts.

Closer to the reality, therefore, is the news that the Greek riots are spreading across Europe, with disturbances being reports as far afield as Moscow and Madrid. Even in Copenhagen, 32 people were arrested when their protest in support of the Greek protests turned violent.

Needless to say, despite the turmoil in Greece, prime minister Costas Karamanlis has still jetted off to Brussels to attend the European Council, leaving behind him a government with a parliamentary majority of just one seat. That shows where his priorities really lie, but one wonders whether his majority will still be there when he gets back.

What I particularly liked though was a comment in a newspaper, which stated "This is a country with a state that is in a shambles, a police force in disarray, mediocre universities that serve as hotbeds of rage instead of knowledge and a shattered health care system. It is also on the brink of financial ruin." I had to do a double-take to realise that this was the Greek paper Kathimerini, writing about Greece, which it says is in "self-destruct mode".

Greece is not the only country and, with the "colleagues" prattling on about global warming, Ganley about being "democratic and answerable" and our own local politicians about who knows what (or cares), it seems the whole political class is set to follow.