Does anyone care what David Miliband says? 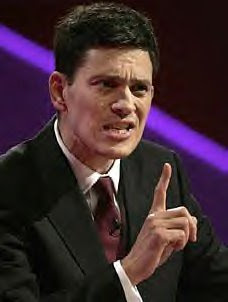 This may sound a frivolous question but I would like to know the answer. After all, he is making statements and calling for a cease-fire in Gaza.

The Foreign Secretary insisted any ceasefire had to ensure Israel's security and reinforce the position of elected Palestinian leader Mahmoud Abbas.

Speaking before the talks in Paris, Mr Miliband said the EU also had an important role" to play in the provision of humanitarian assistance to the Gaza Strip.

The first part sounds like a lost cause since Hamas is seriously uninterested in Israel's security or even in its existence and couldn't care less about Mahmoud Abbas, especially as the latter has blamed the crisis on them.

The second part is idiotic. Humanitarin assistance is going through and all the much-vaunted EU aid has done so far is to enable Hamas to acquire quasim rockets at our expense.

Then again, the Shadow Foreign Secretary has not exactly disintinguished himself in this crisis. What else is new, one might say.

It is very difficult to know what to do about the Gaza story and my colleague and I have had some discussion on the subject without coming to any conclusions. On the one hand, the story is the biggest one around and we cannot simply ignore it; on the other hand, it is being covered by every media outlet and numerous blogs, especially on the other side of the Pond.

Then again, how often can one say that the Israeli attack was predictable from that day a couple of weeks ago when Hamas stepped up its rocket barrage? Or announce that this time the Israelis must finish the job and get rid of Hamas as that is an absolute prerequisite for anything resembling peace in the area and decent life for Palestinians?

For the time being we shall do periodic round-ups of interesting news items. So here goes:

Fausta blogs on the conference call conducted by the Israeli Ambassador to the United States, as organized by the Israel Project. Speaking as someone who has been trying without any success to interest various organizations in this country in the importance of the blogosphere, I can only welcome such an exercise. The more we hear directly about what is going on in Israel and in Gaza, instead of accepting Hamas propaganda and media distortions (but I repeat myself) the better for all concerned.

Oddly enough, there is disarray among the media. However much one talks about disproportionate this, that and the other, it is hard to get away from the fact of that continuing barrage of rockets and the other fact of Hamas refusing to consider any kind of negotiations.

The excerpts on Fausta's blog are worth reading and she is promising a link to the full transcript as soon as possible.

Richard Landes is blogging from Israel, keeping up-to-date on all the news and still managing to read the western media.

Al-Jazeera, as ever, provides excellent coverage on the English-langage website. Here is the hilarious story of the little boat, Dignity, equipped by the Free Gaza Movement (free from whom, I should like to know), that was stopped by the Israeli navy.

Rule number one: when you are a small boat trying to get through a naval blockade you do it a little less obviously. Unless, of course, the aim is to get maximum publicity rather than help anyone else.

Avital Leibovitz, an Israeli military spokeswoman, said that humanitarian aid was being allowed into the Gaza Strip and the medical supplies on the boat would not have made much impact on the humanitarian situation.

Sadly, Al-Jazeera missed on a particularly juicy aspect of the story, the presence on the boat of former Congresswoman Cindy McKinney (Dem, of course, since you ask) who, back in her DC days got into trouble by refusing to show her pass to security guards and trying to bully them. It didn't work then and it doesn't work now.

Meanwhile, back in the tranzi farce of the UN, the SecGen Ban Ki-Moon has announced that Israel's response was disproportionate to the original problem and called for everyone to sit down and talk nicely to each other. Yes, I expect you did all know that.

Naturally, the UN is not taking up the point that a proportionate response would be indiscriminate shelling of civilian towns and villages, something the Israelis are trying to avoid, thus being disproportionate in their response. Even according to the UN of the 380 plus people killed about 61 are women and children, who can be counted as "civilians". The overwhelming majority are Hamas fighters. Fighters get killed in a war. Well, not if they simply fire rockets over the border into Israeli towns but things have changed in the last four days.

I shall not cover the various demonstrations, having already pointed out that several of them are against Arab states and governments who are refusing to support Hamas. Then again, the demonstrators are not volunteering to go and fight either. They are simply complaining about the unfairness of it all.

Here is Al-Jazeera's story on Mahmoud Abbas and the Egyptian Foreign Minister blaming Hamas for the troubles and here is the Press Association report on Egyptian border guards firing on Palestinians trying to escape from the Gaza strip. Good to see that famous Arab solidarity we are always being threatened with by our media.

The still-in-place American Administration is refusing to support any all-out calls for a cease-fire, insisting that the trouble was caused by Hamas and they should stop firing rockets into, otherwise known as attacking, Israel. The incoming Administration is keeping quiet. Oddly enough, this was the lead article on the Reuters website. Clearly, their journalists have not quite got over their Obamania. The President-Elect has made statements on all sorts of issues, despite maintaining that he does not have to say anything yet. The crisis in Gaza, on the other hand, he is keeping quiet on.