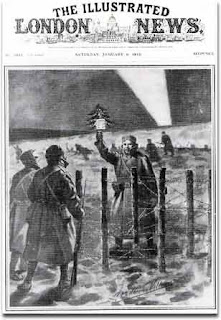 It goes without saying that Christmas is supposed to be the time of peace and goodwill to all men (and women), even if the divorce rate soars after the holiday. It is also supposed to be a time of reflection, and a break from the more worldly things - even if more people are expected to log on today for on-line shopping than attend a religious ceremony.

It is also a day off for many, although for too many it is just one day in a period of enforced idleness, with many companies extending their breaks for a month in order to cut costs and stock inventories, necessitated by the recession.

It is also a time when we offer the inane greeting of "Happy Christmas" to people we don't know, and care little about, even to those who we would decidedly wish not to be happy.

It is all part of a ritual, but one that takes on an added meaning when to utter those words is likely to invoke the ire of the "multicults" who would have us say "happy holiday" for fear of offending some minority or other. Never mind the greater offence when some of their number try to blow us apart.

From all this, you will guess that Christmas is not what it once was. From a celebration of new beginnings – perhaps – it has become nothing more than a temporary cessation of hostilities, and that for no other reason than the enemy has taken the day off.

However, there is a good precedent for that, as pictured above, with the 1914 unofficial truce in the trenches. Basically, what that amounted to was a day off from trying to kill each other. For that reason alone, it would be nice to have 365 Christmas days in each year – or even for just one year – when humanity collectively decided to take a break from killing.

Nevertheless, those who have had to do that dirty business on our behalf do deserve at least one thought from us today, the anniversary of that day when, 94 years ago, their predecessors spontaneously decided they should take a break.

If you want to turn thought into action, pay a visit to Sgt Slingsby, which embodies some of the very best that humanity has to offer. As long as there are people like this around, not all is lost.