Work that one out 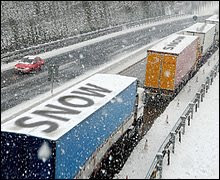 "Las Vegas battered by largest snowfall in 30 years" says The Times, retailing that the US National Weather Service has said that the city faces its biggest snowstorms since 7.8 inches of snow was registered in 1979. Schools have been closed, flights grounded, and major roads have been closed as the iconic Strip was buried under five inches of snow with more forecast.

On the other hand, Russia Today tells us that Muscovites dreaming of a White Christmas are being shattered as the Russian capital is experiencing its warmest winter ever. The Russian capital now has a big problem as it is due to host the FIS World Cup Alpine promotional event on January 2, 2009. This is aimed at stimulating interest for Alpine Skiing as part of the build up to the Sochi 2014 Winter Olympics.

Some 30,000 people are expected to watch the events, which are impossible to stage without 4,000 cubic metres of snow, yet Moscow has seen none so far this year. However, the organisers have found a solution. They are now importing snow from the Kemerovo Region in Siberia, which was "troubled" by heavy snowfalls recently. The Siberian snow is being packed into 300 kilogram bags and sent to Moscow in refrigerated carriages, which means the skiing event will take place in time.

China, however, is suffering its coldest weather so far this winter, brought in by a Siberian cold front. Almost all of the country, except for Tibet Autonomous Region, has been affected by the strongest cold front this winter. Some regions recorded temperatures of minus 20 degrees Celsius.

This is relatively mild though. Temperatures in the northeast Siberian republic of Yakutia are expected to fall to minus 60 degrees Celsius (minus 76 degrees Fahrenheit) in the next few days.