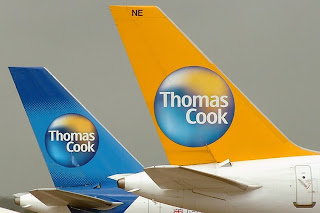 You would think that the travel firm Thomas Cook would know something about the EU when, earlier this year, it was trying to prise half a billion quid out of the commission.

But then you get to see a headline from The Daily Telegraph which tells us, "Thomas Cook attacks government over holiday compensation."

From this we learn that Thomas Cook has pledged to compensate holidaymakers of failed suppliers from airlines to cruise operators within 24 hours, it having given up "on hopes that the government will increase its supervision of the industry."

The story is by Jonathan Sibun and we finally get from him that the problem is that tour operators have to trade under the ATOL compensation scheme, which protects consumers at a cost of £1 per customer, yet airlines are exempt. Thus, independent travellers are not protected. It was for this reason that, when the budget airline XL failed last year, it left 85,000 holidaymakers stranded abroad and hundreds of thousands more out of pocket.

Complaining of "the absence of the Government making any changes to the ATOL scheme to protect all our customers' money now", Thomas Cook chief executive Manny Fontenla-Novoa, is announcing that his company is taking steps to protect all customers who travel with his firm.

"It is a ridiculous situation where one customer is protected and another is not and they are both sitting on the same aircraft," said Fontenla-Novoa. "The government had an ideal opportunity to bring clarity and protect the consumer. So far they have failed to do that."

Fontenla-Novoa, with another package tour company, Tui, wrote a letter to the Government in late September calling for reform of the ATOL scheme. "Consumer protection should take into account the changes; in the UK, only a third of people taking holidays abroad by air book via a package," they wrote.

The government's response, we are told, was "sympathetic" but no progress had been made.

All this sounds good stuff but the compensation scheme Fontenla-Novoa is talking about is mandated by EU law under Council Directive 90/314/EEC on package travel, package holidays, and package tours. That, of course, cannot be changed by the British government, so it is hardly surprising that there is "no progress".

With UK airlines, the UK could go further than the directive, provided that it did not distort competition or interfere with the workings of the Single Market. But, with such an international operation as the package holiday business, it is hard to see how unilateral British action could avoid this.

More to the point though, the "government", i.e., the EU, has already latched on to the changes in the travel industry. The existing directive, which dates from 1990, only regulates the sales and marketing of traditional tour operators and travel retailers, but does not extend to online travel firms selling foreign holidays with flights and hotels as separate components.

This is called by the industry "dynamic packaging" and EU commissioner for consumer protection, Meglena Kuneva, has confirmed work on revising the directive will begin shortly in order to accommodate this - with legislation expected in 2010.

Thus, in May last, she told a meeting of the European Travel Agents' and Tour Operators' Associations: "The package travel directive needs to be reviewed to take account of the changes in distribution of travel products and consumers' buying habits."

Surely it cannot be the case that Fontenla-Novoa is unaware of this? He really cannot be unaware that the EU is already reviewing one of the most important pieces of legislation for his industry, with potentially far-reaching effects, and precisely those effect he is calling on our local government to make?

I really do find it hard to believe that the chief executive of such a company is so utterly ignorant. He must be playing PR games, surely?

As for DT journo Jonathan Sibun … well, we have ceased to expect people like him to be capable of spotting the elephant in the room, even if it took me something less than five minutes to find out that the EU was proposing to change the law. It was published in the travel industry's own journal, Travel Weekly.

Yet Siburn still manages to write about the "government", obviously without the first idea of where our real government resides on this matter. To his article, therefore, the question is "Which government are you writing about?". To that, I suspect, we would get a blank stare from little Jonathan. He probably wouldn't have the first idea of what we were talking about.